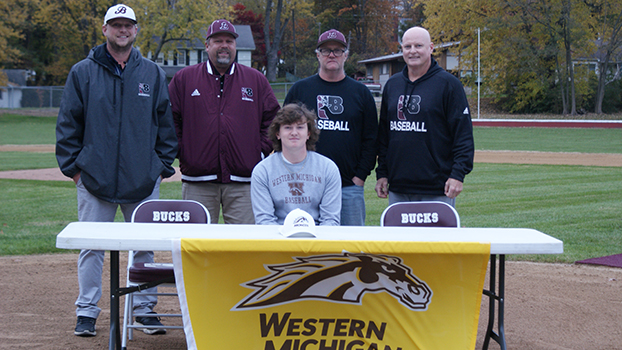 Hoover, who helped lead the Bucks to the Division 3 Baseball Semifinals at Michigan State University last June, was one of seven players that Broncos’ Head Coach Billy Gernon announced the school signed last week to the Class of 2022.

Hoover said that the Broncos first showed interest right before the Division 3 Regional at Cornerstone University. Western also came to Michigan State to watch him play against the University of Liggett in the semifinals.

“I chose Western because it just was the perfect fit,” Hoover said. “I realized they were really interested in me if [the recruiter] was willing to drive all that way for one game. I took a tour a couple days later in fell love with everything.”

Another reason was Hoover’s family’s ties to Western Michigan.

The son of Lonnie and Jennifer Hoover, Matthew Hoover is also the grandson of WMU Athletics Hall of Famer Liz Miller, who played volleyball and field hockey for the Broncos. Miller also coached softball at Lake Michigan College and Notre Dame.

“Another big thing for me was, will my grandparents be able to watch me?” he said. “I only live about an hour away, so them being able to come whenever and watch me was huge. My grandma went to WMU and is in their hall of fame, so I thought it would be cool to go where she went.”

Hoover is getting ready to start his fourth year at Buchanan. Besides pitching, the senior played shortstop for the Bucks, who were 34-3 last season. On the mound, Hoover had an ERA of 0.45 with 115 strikeouts in 62 innings of work. He earned All-BCS, All-District, All-Regional, and first-team All-State honors.

“Matt is a strike-thrower with a developed arsenal, led by a tremendous breaking ball and electric fastball,” Gernon said. “His athleticism was evident every time we saw him, and he demonstrated strong pitch ability while beating some of the best teams in the state during his team’s postseason run. We are thrilled to add an athlete like Matt to our pitching staff and locker room.”

“We are bringing in strength, toughness, athleticism, character and relentless skill. We feel great about the connection we have made with these recruits and their families. It is with open arms we welcome them into the amazing culture that is Western Michigan baseball.”

Hoover said that he was not really looking at any other school.

“I really wasn’t deciding any other schools other than Western,” he said. “I was always undersized and really wasn’t on anyone’s radar until last year. Just seeing how dedicated the coaches were to getting me to come there was big. That’s the kind of coach I knew I needed to play for, someone that dedicated.”

Hoover said he has not yet decided on his major, but is looking forward to making that decision in the next few months.