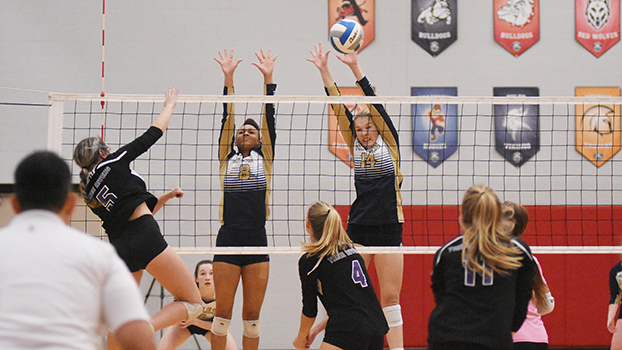 Niles is going to have to block well against No, 1-ranked Grand Rapids Christian in the Division 2 Quarterfinals Tuesday night. (Leader photo/SCOTT NOVAK)

NILES — Niles has a big hurdle to overcome on the road to Battle Creek and the Division 2 Volleyball Finals.

That challenge is No. 1-ranked Grand Rapids Christian, the three-time defending state champion, and its 6-foot-3 outside hitter Evelyn Doezema.

Grand Rapids Christian and No. 6-ranked Niles will play at 7:30 p.m. Tuesday at Grand Rapids South Christian High School in Byron Center. The winner advances to the semifinals, facing either No. 7-ranked Detroit Country Day or No. 2-ranked Pontiac Notre Dame Prep.

Doezema helped lead Christian to a 22-25, 25-20, 29-27 and 25-13 win over Hudsonville Unity Christian for the Division 2 Regional championship last Thursday night. She finished with 42 kills and a hitting percentage of .363. In Christian’s 3-0 semifinal victory over Whitehall, Doezema finished with 20 kills. On the season, she has 701 kills.

Niles Coach Jenny Nate knows that her team will have to slow down Doezema if it wants to make its first trip to the Kellogg Arena in Battle Creek and a spot in the semifinals.

“She is one of the toughest hitters in the state, and she gets set at different offensive spots every single rotation,” she said. “So, we have to make sure we are playing aggressively on offense and putting the ball away in and out of system — really attacking the weaknesses in their defense and at the same time putting pressure on her to slow her down in various facets of her game. We know she is going to get some kills, but we are ready to put pressure on her, stop her as much as possible and then focus in on our offensive attacking. Our blockers are ready for the challenge, and our defensive players are ready to play more aggressively than ever in our backcourt.”

Niles split with Gull Lake to open the season, while Christian won the lone matchup 2-1. The Vikings were also 1-1 against Portage Central, while the Eagles won their only meeting 2-0. Niles lost to Rockford in its lone matchup. Christian defeated Rockford once, 2-1, and dropped a pair of matches 2-0.

“We have beaten a team who beat them, so we know we can do this,” Nate said.

There is not a single player on the Vikings’ roster from 2017 when Niles reached the state quarterfinals before being eliminated by No. 3-ranked Lake Odessa Lakewood 3-2. The Vikings were ranked No. 4 heading into that match.

Nate has to be able to control the emotions of her team as they get ready to play the biggest match of the season and of their careers.

“None of my current players were on our quarterfinal team, so we will continue to work on preparing [like we do for every big match], which gives our team confidence,” she said. “We will continue studying, utilizing mindset work and mental focus that we work on daily [film study, reading, culture work, affirmations, visualization, teamwork, attitude and bringing our energy]. I remind them that the most pressure is on the opponent. We are the sleeper/dark horse small team from a small town, and we earned our way there. Now, we have to show up with our energy, play our game and bring the fight to them.”

Tickets must be purchased online at GoFan.co.