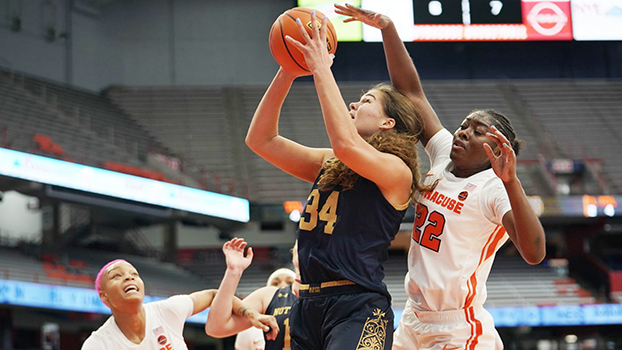 Maddy Westbeld scored 19 points as Notre Dame remained undefeated with a win over Syracuse on the road Sunday. (Submitted photo)

The Irish had four scorers in double figures, led by a 19-point effort from Maddy Westbeld. Sam Brunelle added 17 points off the bench, and Dara Mabrey added 16 points, going four-for-six from beyond the arc.

Freshman Olivia Miles added 10 points in the winning effort. Miles and Mabrey ultimately combined for 15 of the team’s 19 assists.

The Irish dominated the paint, out-scoring the Orange 44-22, led by Westbeld and Brunelle, and outrebounded the Orange 45-38. After 14 turnovers in the first half, Notre Dame settled in over the final 20 minutes, turning it over just one time in the third quarter, and five times throughout the second half.

Syracuse (1-1, 0-1) hit the first shot of the afternoon, a 3-pointer from Naje Murray at the 9:32 mark before the Irish went on a 13-0 run. Westbeld led the run that lasted nearly six minutes in the first quarter as she scored the first six points for the Irish to begin the contest. The two teams stayed even over the final two minutes of play as the first quarter ended with the Irish leading 17-10.

The Syracuse defense ramped up the pressure in the second quarter as they cut the Irish lead down to 28-26 with 3:33 remaining in the half. Notre Dame regained control in the final minute of the half.

Olivia Miles found Sam Brunelle under the hoop for an easy layup with 57 seconds remaining. Just 20 seconds later, Sonia Citron grabbed a Syracuse cross-court pass and went coast-to-coast for the finish. The Orange had enough time remaining to get a quality look, but Miles blocked the shot attempt and the Irish went into halftime with a 34-28 lead.

Syracuse came out of halftime hot, scoring the first five points to cut the Irish lead down to its slimmest of the contest at 34-33. However, Notre Dame rallied for five of their own as Miles dished to Mabrey who hit her second three-pointer of the game. Mabrey continued the mini-run as she found Dodson in the paint for a jumper that extended the lead to 39-33.

The third quarter was a slugfest as each team shot over 46-percent from the field. The Irish gained an eight-point advantage after outscoring the Orange 23-21 in the quarter. At the end of three, Brunelle, Westbeld and Mabrey were all in double figures already. Heading into the final quarter, the Irish led 57-49.

The Irish put the game away in the fourth. Syracuse cut the lead down to 61-56 with a little over eight minutes remaining. Then, Notre Dame closed the contest on a 21-0 run. Westbeld ignited the rally, scoring nine-straight points. She finished strong with two old-fashioned three-point plays before hitting a triple off a pass from Citron. Mabrey added a pair of triples in the run, as Citron and Miles contributed six more points to close out the contest.

The Irish jump back into non-conference play Thursday as they will host the Fordham Rams at 7 p.m. at Purcell Pavilion.