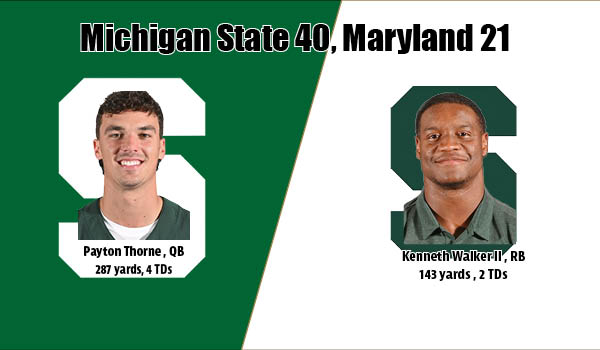 Walker collected a total of 172 all-purpose yards as he also had two catches for 29 yards. It marked Walker’s seventh 100-yard rushing game of the season and it was his sixth game of 150-plus all-purpose yards.

Thorne completed 22-of-31 passes and tied his career-high with four touchdowns as the Spartans (9-1, 6-1 Big Ten) had 481 yards of total offense.

Jayden Reed led all players in the game with 210 all-purpose yards, including eight catches for 114 yards and two touchdowns. He also had four returns for 96 yards.

Xavier Henderson, Darius Snow and Marqui Lowery all had seven tackles apiece to lead the Spartans, while Jeff Pietrowski had two tackles for loss (17 yards) and one sack (14 yards). In his first start of the season, Noah Harvey had five tackles and an interception return for 35 yards.

The Spartans opened the game with a quick touchdown, as Thorne connected on a 52-yard pass to Montorie Foster off of a flea-flicker. It marked the fourth time MSU has scored a touchdown on a flea-flicker this season (Youngstown State, Nebraska, Rutgers, Maryland).

Michigan State extended its lead later in the first on Thorne’s 29-yard touchdown pass to Reed in the corner of the end zone, but the Spartans did miss the extra point.

Maryland got on the board right before the end of the first quarter, scoring on a Peny Boone 4-yard touchdown run following a Taulia Tagovailoa 45-yard rush on a third-and-3 play from the MSU 49 to cut the Spartan lead to 13-7.

Reed took the ensuing return 39 yards to give MSU good field position on its next series at the Spartan 41, and Michigan State took advantage by going 59 yards on 14 plays, capped by a 2-yard touchdown pass from Thorne to Connor Heyward, giving MSU a 20-7 advantage at the 8:11 mark in the second quarter.

Maryland trimmed the Spartan lead to 27-14 with 56 seconds remaining in the second quarter as Chigoziem Okonkwo caught a 32-yard pass from Tagovailoa for a Terrapin touchdown.

On their first drive of the third quarter, the Terrapins drove the ball into the red zone, but Harvey recorded his first career interception near the goal line and returned it 35 yards for the Spartans. That sparked an MSU touchdown drive that spanned 64 yards on eight plays to put MSU on top 34-14, as Reed hauled in a 3-yard touchdown pass from Thorne, his fourth touchdown toss of the game, at the 9:37 mark in the third.

Maryland answered right away with a three-play touchdown drive, led by a 32-yard touchdown screen pass from Tagovailoa to Okonkwo, that made it 34-21. The Spartans fumbled on their next series, giving Maryland the ball on the MSU 28, but the Terrapins could not take advantage and ultimately missed a 41-yard field goal after having first-and-goal on the two. Henderson was credited with a sack on the key third-down play as Tagovailoa was flagged for intentional grounding on the 19-yard loss.

Walker scored his second rushing touchdown of the game with 10:34 left in the game on a 3-yard rush to give the Spartans a 40-21 lead.

Michigan State returns to action Saturday, to face Ohio State in Columbus at noon. The game will be televised on ABC.