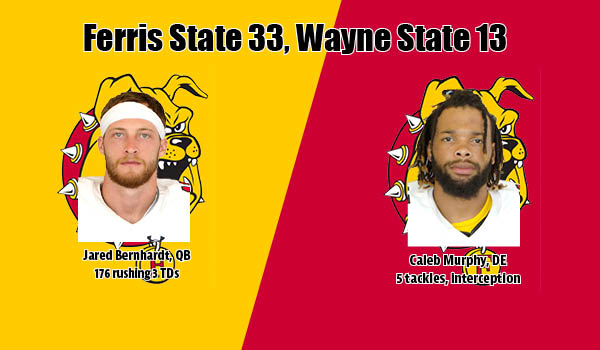 The Bulldogs limited WSU to 195 yards of total offense and overcome a low-scoring first half by scoring 28 second-half points in the win to finish the regular season a perfect 10-0 overall and 7-0 in league play. It came on Senior Day as the Bulldogs honored 20 seniors prior to the final home contest of the regular season.

The conference championship was not only FSU’s third straight, but also the Bulldogs’ fifth in the past seven seasons.

The Bulldogs finished the game with 554 yards of total offense, including 434 rushing yards with two 100-yard rushers on the afternoon.

Wayne State battled FSU close in the opening half, grabbing a 6-0 lead early in the second quarter on Kendall Williams’ three-yard run following a scoreless first period of action.

Ferris State took its first lead of the afternoon late in the half with only 37 seconds to go when tailback Tyler Minor finished off an eight-play, 55-yard drive with a two-yard scoring run. The 7-6 lead stood as the halftime margin.

FSU added on to its lead on its first offensive drive of the second half, pushing the advantage to 14-6 as senior quarterback Jared Bernhardt scored the first of his three second-half touchdowns with a two-yard scoring run less than five minutes into the period. It finished off a six-play, 46-yard drive for the Bulldogs.

Bernhardt later added a seven-yard run to finish a short three-play, 19-yard drive midway thru the third, giving FSU a 21-6 advantage in the contest.

The Bulldogs pushed the lead to 28-6 early in the fourth as Bernhardt scored on a five-yard carry to finish off a five-play, 23-yard jaunt for FSU. Later, the Bulldogs capped their scoring on Bernhardt’s 52-yard scoring throw to slot receiver C.J. Jefferson with 8:18 remaining in the game.

The Warriors put the final points of the day on the board with 2:14 to play when Williams scored for the second time on an eight-yard run.

The Bulldogs held Wayne State to only 64 rushing yards on 34 attempts in the victory.

Bernhardt paced FSU on the ground with a game-high 176 rushing yards and three scores on 24 carries. Minor added 106 yards on 16 attempts while Jefferson had 66 rushing yards to go with a team-high three catches for 59 yards.

Defenisvley, senior linebacker Liam Daly paced the Bulldogs with eight tackles, including two for loss. Both Caleb Murphy (Dowagiac) and John Higgins had five stops each, while Murphy also had an interception for FSU.

The Bulldogs, who were the top team in the NCAA Super Region Three Rankings this past week and expected to receive their seventh consecutive playoff appearance, will now await the official NCAA Division II selection show set for Sunday at 5 p.m. at NCAA.com.