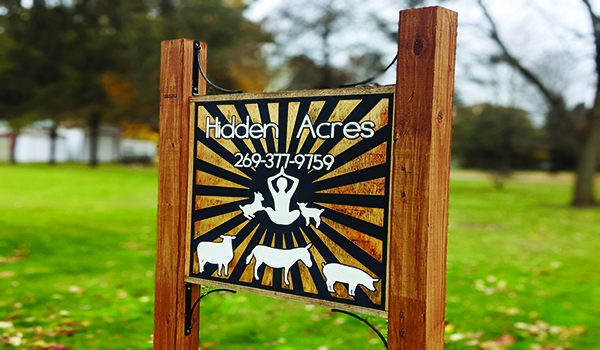 The nonprofit organization, which has been fighting since May to stay open after the Silver Creek Township Building and Zoning Administration determined that the facility has more animals than the traditional zoning laws allow, received confirmation from the Michigan Department of Agriculture and Rural Development that its farm operation is protected by the Michigan Right to Farm Act.

The RTFA protects farmers who agree to follow the state’s Generally Accepted Agricultural and Management Practices from nuisance lawsuits as long as the farmers comply with GAAMPs that cover a number of practices, ranging from manure management to water use.

According to a letter to Hidden Acres from the MDA, Hidden Acres “conforms to all applicable Generally Accepted Agricultural and Management Practices.”

Copies of the letter were also sent to Silver Creek Township and Cass County.

Dawn East and Heather Matthews, founders and operators of Hidden Acres, are relieved that the months-long saga is finally over.

“We’re thankful,” Matthews said. “It was just nerve-wracking every day to think about what we were gonna do with all these animals.”

“It was a challenging and frustrating process,” East said. “Some days, I just wanted to cry because you’re finally swinging in the right way and then you get something else and it’s like are you kidding me? Because everything that could have been thrown at us was thrown at us.

Hidden Acres has provided homes for unwanted and special needs livestock since opening in 2017. The shelter works closely with local 4-H organizations and hosts popular events including goat yoga, artisan markets and Trunk or Treat.

East and Matthews thanked the community for its continued support throughout the process.

In the months since being informed that it could be shut down, people throughout the area have shown support for the farm by attending township meetings, donating funds and resources, and sporting “We Support Hidden Acres” signs in their yards.

“It means that they want us here,” Matthews said. “It means that we have a place in this community. What we’re doing is not for us. Nobody gets paid. We have amazing volunteers that come in every day to help us. This is a big deal in our community, there’s nothing else like us.”

With the township ordeal in the rearview, East and Matthews look forward to Hidden Acres being a safe haven for animals and the community alike for years to come.

“This is a happy place,” Matthews said. “This is where people come to calm down and have fun. We don’t want any drama, we just want our volunteers to feel safe and happy when they come out here.”