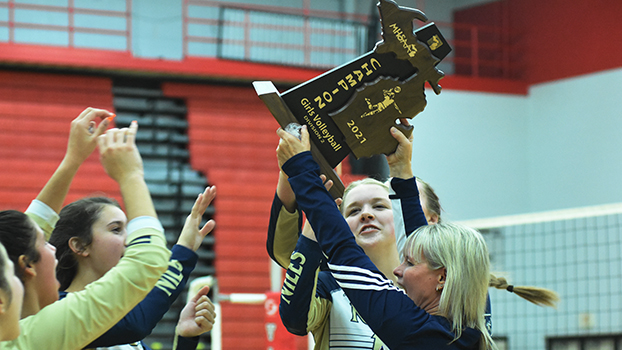 The Vikings swept Wolverine Conference foe Three Rivers 25-18, 27-25 and 25-16 to claim the Division 2 title at Vicksburg High School Thursday night. Niles’ reward for winning the championship is a date with No. 1-ranked Grand Rapids Christian in the state quarterfinals at Grand Rapids South Christian Tuesday night.

No matter the opponent, Niles Coach Jenny Nate is confident her squad will put in the work leading up to the match and will be prepared to give the Eagles a battle.

“It is time to study,” she said. “Time to get back to work. These girls can do it. They can do anything they set their minds to.”

Nate said her team was a bit nervous to open the match against the Wildcats. Three Rivers took advantage of that by jumping out to leads in both of the first two sets.

The Vikings caught the Wildcats at 12-12 and then took control of the first set to grab the 1-0 lead. In the second set, Niles rallied to tie Three Rivers 13-13, but this time, the Wildcats would put up more of a fight.

The two teams went back-and-forth the rest of the way, with the Vikings squeaking out the 27-25 win to move within a set of the regional title.

Losing both sets after leading seemed to drain whatever energy Three Rivers had remaining. It was all Niles in the third and final set as it opened up a 17-9 lead and never looked back.

“It is always going to be energy for us,” Nate said. “Since day one of the season until today, the energy is there. Now, I am not going to say there weren’t a few jitters to start the match. Once they settled down a little bit and relaxed, it was all about the energy and playing like a team.”

Niles’ “big three” upfront — seniors Marika Ruppart and Amara Palmer, along with junior Jillian Bruckner — delivered again for the Vikings. Nate also sprinkled in her pin [outside] hitters — junior Chloe Alkire, sophomore Zyon Brazo, and sisters Bree and [freshman] and Brynn [junior] Lake, all of whom contributed to the victory.

“We knew what kind of block we wanted to put up and what type of off-hitter defense we had to have, so we have studied so much,” Nate said. “We knew what we had to go to if this was happening. A lot of times, it didn’t even have to do with what we were doing, but what they were doing. We made our adjustments. We knew if we put the right people in the right places defensively, then we can get up there and put the ball down. We were really able to mix it up tonight.”

Not to be outdone, the Niles defense played well, which allowed the Vikings to get the ball up to the setters, who then delivered it to the hitters.

Junior Kailyn Miller had a team-high 12 digs to go along with nine points. Sophomore Amelia Florkowski contributed eight digs and two points, while senior Cadence Knight, who continues to play through a leg injury, ended the match with seven digs and four points.

Senior Emma Beckman had a team-high 17 assists to go along with six kills and 11 points. Junior Anna Johnson finished with 11 assists, four digs and three points.

“Our serve-receive did such a phenomenal job,” Nate said. “We had some amazing digs. Our setters came out and were super clean. They did a good job of deceiving the block. Three Rivers has a good block. You have to give credit to our setter knowing where to push the ball.”

Niles and Grand Rapids Christian will play at 7:30 p.m. Tuesday. Tickets are on sale at GoFan.co.