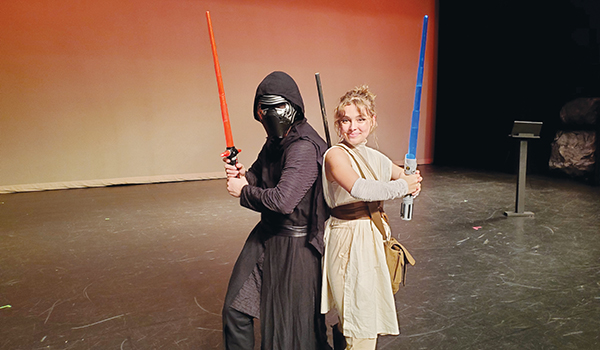 EDWARDSBURG — Edwardsburg High School students will transport community members to a galaxy far, far away as they perform a comedy show next week.

Edwardsburg High School will present “Star Stars: The Franchise Awakens,” a “Star Wars” parody by Dean O’Carroll Nov. 19-21. Hosted at the Edwardsburg Performing Arts Center, showtimes will be at 7 p.m. Friday, Nov. 19 and Saturday, Nov. 20, and 2 p.m. Sunday, Nov. 21. Tickets, which can be purchased at the door or online at edwardsburg.ticketleap.com/stars, are $10 for adults or $8 for students and seniors.

“Our show is a parody of ‘Star Wars,’ and is loosely based off of ‘The Force Awakens,’” said Director Catherine Wood. “It’s got comedy, adventure.”

Next week’s play will be the first Edwardsburg students have hosted in front of a fully live audience since the COVID-19 pandemic began. Due to the hardships the entire community has faced due to the pandemic, Wood knew she wanted the show to be a fun one to lift everyone’s spirits. She said “Star Stars: The Franchise Awakens” fit the bill perfectly.

“We needed to do something lighthearted and fun,” she said. “We wanted people to be able to sit, relax and laugh and enjoy being in the theater again.”

Wood said she believes anyone will be able to laugh at the play — whether or not they are familiar with the “Star Wars” franchise.

“I remember going to see the original movies in the theater, but maybe half the students have not seen it,” she said with a laugh. “But I think there is a little something for everyone.”

Not only does Wood think the audience will appreciate the play, but she also said her students have had a fun time putting it together and believes it has been a positive experience for all.

“They gain confidence and responsibility, and this cast is a family,” Wood said. “They are there for each other. That’s a huge thing they get out of it.”

The play’s leads, senior Emileigh Paulus, who plays Zap, based on Rey from “The Force Awakens,” and junior Brandon Maynard, who plays Emo-Whine, based on Kylo Ren from the same film, agreed. They both said they have had a blast with the play.

“I love ‘Star Wars’ — I’m like the biggest ‘Star Wars’ fan ever, so being able to become one of my favorite characters is just so amazing,” Paulus added. “I’ve learned so much from Ms. Wood this year, and I think this is going to be my best show.”

With opening night nearly here, both the teens said they cannot wait to perform in front of a live audience again.

“It’s exciting because this is our first show in a while,” Maynard said. “[With live audiences], there is this rush when you go out on stage.”

Wood said she would encourage the community to come to see the play to both have a good laugh and support the high school cast.

“It’s going to be a very exciting show,” she said. “It’s a great way to just step outside of yourself for a moment. You can sit back, relax and enjoy the spectacle of it, the comedy of it and have fun.”