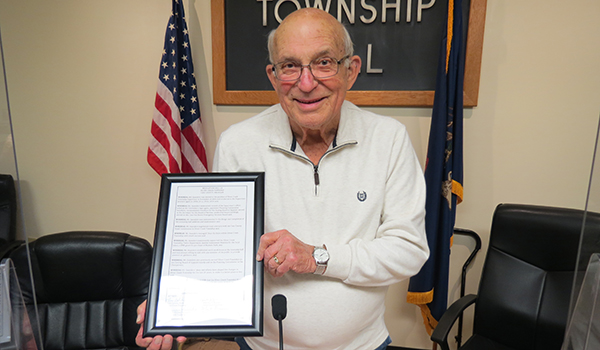 SILVER CREEK TOWNSHIP — When Bill Saunders retired for the first time, he went from working seven days a week for 32 years at his coin laundry business to not working at all.

“I just couldn’t stop,” he said. “After about a month and a half, my wife said, ‘you’re going crazy,’ and that was true.”

At his final board meeting as supervisor of Silver Creek Township on Wednesday, Saunders was honored by the board with a framed copy of a resolution passed at the meeting recognizing his accomplishments and years of service to the community. Saunders, whose last day as supervisor is Nov. 30, will remain a trustee on the board, while Trustee Mick Braman will take over as supervisor effective Dec. 1.

The resolution stated a multitude of accomplishments Saunders has achieved through the years. Among those was his work with the city of Dowagiac to negotiate grants for the purchase of Russom Park, as well as his efforts toward the design and completion of the township hall addition.

He also established work week hours as the township hall and organized township “clean up days,” to much success, according to the resolution.

“Making me blush,” said Saunders, as township clerk Lorri Behnke began to read the resolution, which also mentions his serving on the zoning board of appeals, the Cass Van Buren Emergency Services Board and being chairperson of the planning commission.

“[Bill] was always willing to talk with any member of the public to provide answers or guidance,” said Behnke, reading from the resolution. “Your ideas and efforts have shaped the changes in Silver Creek Township for the last 20 years to make it a better place to live.”

“It’s been a joy working the boards that I have over the years,” Saunders said. “I thank the people for being pleased with me all those years to re-elect me each time. … It’s been a good ride.”

Trustee Mike Glynn said he appreciated Saunders for his ability to have a discussion, even if the two disagreed.

“Thank you for putting up with me all these years,” Glynn said. “You’ve always let me come in and talk and complain and moan and groan and argue with you. All in all, it’s very much like being at home because my wife lets me do the same thing – and we still do it her way.

“It’s always been like that with you, too. Thank you for that.”

After the meeting was over, Saunders said the feeling of being done with his last meeting as supervisor was a bit strange. While he’s been looking forward to slowing down a bit, he will remain on the board as a trustee and will serve with the zoning board of appeals as a liaison.

“I couldn’t just sit down,” he said. “Still can’t. But this way I don’t have any of the pressures of the phone calls.”

“I come and go as I please, and that’s what I’m looking for,” he said, before laughing at the notion of a second retirement. “I’m 83 years old, it’s time to start enjoying things.”