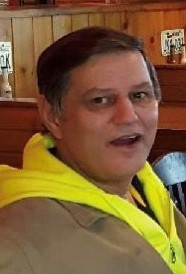 He enjoyed riding his motorcycle and watched all Detroit sports. He was preceded in death by his brother Paul John Rafferty, Jr. in 1970, his father Paul John Rafferty, Sr. in 1987 and his mother Vera Rafferty in 2018, whom he helped care for prior to her death due to a terminal illness. He is survived by his brother, Lee Roy Rafferty, as well as his four sisters, Sharon Lee Gard, Patricia Ann (Michael L.) Mohney, Jenni Lynn (Roy Gantt) Rafferty, and Cindy Lou Green; as well as many cousins, nieces and nephews. Jim was the baby of our family and was a very caring and loving gentleman. When he did include himself, he was very happy to be there and spoke of the event very positively.  He would always volunteer to help out when asked. Jim took second place at State Wrestling Finals in featherweight division as well as holding an undefeated record in wrestling at Jefferson High School while also playing football. He was a very proud winner of The VICA Skills Meat Cutting Competition and the family was very enthusiastic about his accomplishment. The family would like to thank his cousins and aunts and uncles for the care and compassion they showed our loved one during his lifetime. Family and friends are invited to attend a Funeral Luncheon at 2 p.m. Nov. 20, 2021, at the Wounded Minnow located at 234 S. Front St. Dowagiac.