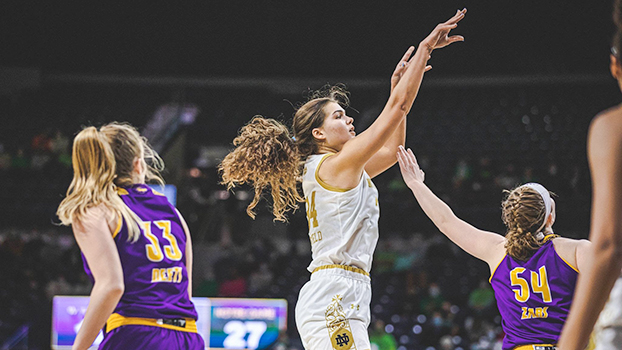 Maddy Westbeld pulled down a career-best 18 rebounds to go with her 15 points as Notre Dame defeated visiting Western Illinois 76-50. (Photo courtesy the University of Notre Dame)

It was a night of new career highs, including Maddy Westbeld tying the Purcell Pavilion rebounding record.

The Irish (2-0) were powered by two double-double performances from Westbeld and Olivia Miles. Westbeld reeled in a career-best 18 rebounds to go with her 15 points. Westbeld’s 18 boards tied a Purcell Pavilion record last achieved by Devereaux Peters, who just so happened to be watching courtside.

Meanwhile, Miles earned double-double No. 1 with career highs in points and boards with 16 and 11, respectively. Tonight marked the first time two Irish players secured double-doubles in the same game since Jessica Shepard and Brianna Turner in the 2019 national championship game.

“I thought our energy started a little low but we picked it up in the second half and that’s a credit to Abby Prohaska, who gave us a lot of energy,” said Notre Dame Head Coach Niele Ivey. “Also credit to Maddy’s 18 boards and Olivia’s first double-double. Those two keep us going, especially with Olivia’s ability to run this team. This group will continue to grow and learn each night.”

Maya Dodson was close to making it three players with double-doubles, finishing with 14 points and eight rebounds. Dodson and Westbeld got it done defensively, each picking up three blocks.

Westbeld scored seven of the team’s first 14 points to get the Irish offense humming. She was also active on the glass early, collecting five boards by the end of the first period. Ultimately, Notre Dame recorded a 10-0 run from 9:00-5:58 to jump out to a 10-2 lead and finished the quarter up 22-10.

The Irish shooting cooled a bit in the second where they shot just 29.2 percent. However, Notre Dame continued to crash the boards, boasting a 36-17 rebounding advantage by halftime. Speaking of rebounds, Westbeld was up to 13 at the midway point — already a career high. She also was one point shy of a double-double by halftime.

At the half, Miles was in double figures with 10 points to go along with her six rebounds and three assists. Dodson supplied some firepower of her own in the first half with eight points and six rebounds.

Notre Dame started the second half up 37-26. By 5:23 in the third Westbeld had finally secured her double-double. In addition, from 7:33 to 5:00 minutes, the Irish connected on six straight buckets, courtesy of Mabrey, Dodson and Westbeld, building a lead of 16 (49-33) at the 4:44 media timeout.

The Fighting Irish shot 11-of-17 in the third (.647), rolling into the final period up 59-36. Abby Prohaska provided a spark off the bench in the fourth, scoring all seven of her points in the period. She also finished with four rebounds, three assists and one block.

In a unique situation just for the 2021-22 season, the Irish will be playing a conference game in November. On Sunday, Notre Dame will travel to Syracuse for an early ACC bout, airing live on ACC Network. The tip is set for noon inside the Carrier Dome.