One killed, another injured in Silver Creek Township crash 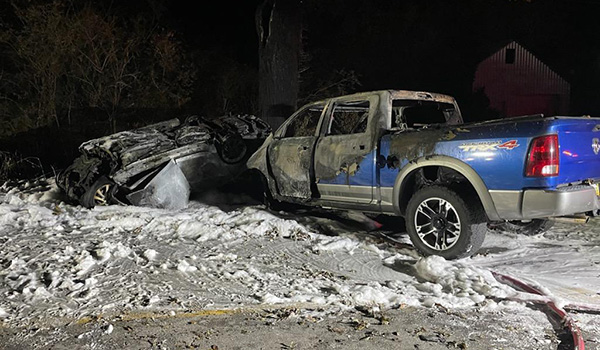 SILVER CREEK TOWNSHIP — A Dowagiac man was injured and another driver was killed in a fiery crash in Silver Creek Township.

Sheriff Richard Behnke reported that his office responded to a two-vehicle crash on M-152 near Phillips Road in Silver Creek Township at 5: 44 p.m. Tuesday.

According to the initial investigation, a vehicle was traveling east on M-152 west of Phillips Road when it crossed over the centerline into the path of the vehicle traveling west.  The eastbound vehicle then overturned during the collision. Both vehicles became engulfed in fire.

The driver of the westbound vehicle, Todd Yeager, of Dowagiac, was transported to Ascension Borgess Lee Hospital in Dowagiac and was treated and released.

The other driver succumbed to injuries at the scene. The name of the deceased is being withheld pending identification and notification of next of kin.

Seat belts were worn, and it is unknown if intoxicating substances were used, deputies said.