Eddies ready for Sailors in rematch of region finals 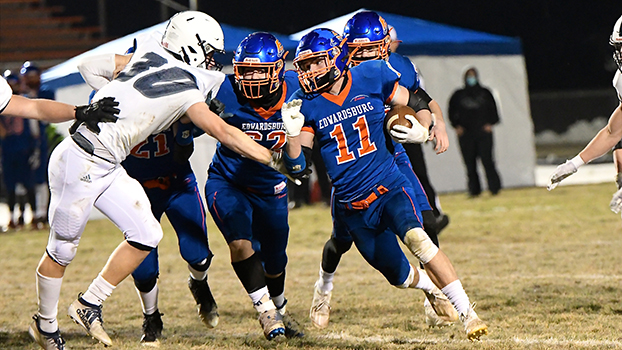 Edwardsburg will host Grand Rapids South Christian for the Division 4 Regional championship game Friday night. It is the second time this year the Eddies and Sailors will play for the regional title. (Leader file photo)

EDWARDSBURG — The last time Edwardsburg and Grand Rapids South Christian met on a football field it was in January.

The Eddies and the Sailors will square off for the second time in the 2021 calendar year when they compete for the Division 4 Regional championship at Leo Hoffman Field Friday night.

The Sailors defeated Wolverine Conference member Plainwell 52-7 in the opening round of the playoffs and then defeated Hasting 38-14 for their second straight district championship.

Veteran Edwardsburg Coach Kevin Bartz said that the Sailors are a different team than they were in January.

“They still have the ability to spread the ball out to several very good receivers, but their preference is to run the ball,” he said. “The quarterback, Jake DeHann, is a true double threat quarterback. He is an elusive runner and a proficient passer. We must contain his ability to run and bring pressure from different areas to keep him off balance throwing. Defensively, South Christian has also improved. They have added several nuances to their defense to try to disrupt our blocking schemes. We will need to be disciplined in our techniques and paths as well as maintain our physicality if we are going to move the ball consistently.”

DeHaan ran for 116 yards on 13 carries in the win over Hastings, while he was 8-of-12 through the air for 87 yards. He had a rushing and a passing touchdown. Nate Brinks also cracked the century mark as he rushed for 102 yards on 11 carries with a pair of touchdowns.

DeHann spread the ball around between Jace DeMann, Jack Schruer and Ashton Fennema. That trio had all eight receptions. DeMann led the way with four receptions for 33 yards. Fennema caught the touchdown pass.

DeMann is also one of the Sailors’ top defensive players. He, along with Cameron Post, have 6.5 tackles. Clayton DeKam had six tackles.

On special teams, Nate Brinks was 5-for-5 in extra points and kicked a 32-yard field goal.

According to Bartz, reaching the regional championship game for the sixth straight year will not affect how the Eddies prepare for the contest.

“To be competitive in the playoffs, you can never afford to be comfortable or complacent,” he said. “Each game is a struggle to survive. Win and move on, or lose and go home. Too much time and energy are spent from January through October to not be focused and at the top of your game.”

Edwardsburg will not make any wholesale changes to its approach to its offensive or defensive game plans. The Eddies will continue to run the ball with a variety of backs, throw the ball when it wants to and play good defense.

A key to Friday night’s contest will be turnovers.

“It has been a long time since we have had two turnovers in a game,” Bartz said. “We usually average five or fewer turnovers in a season so two in one game is a rarity. Turnovers not only prevent you from scoring but can also create big momentum changes in the game. We were fortunate that our defense played well after the turnovers and did not allow Three Rivers to effectively move the ball.”

Kickoff for Friday’s game is scheduled for 7 p.m.