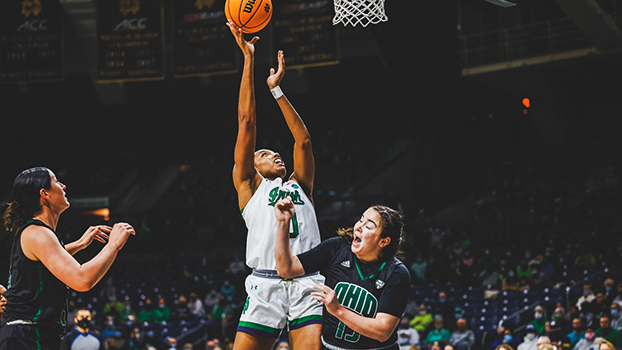 NOTRE DAME — An offensive explosion in the second half by the Notre Dame women’s basketball team led to a 105-69 victory over Ohio University in the season opener Tuesday night inside Purcell Pavilion.

The Fighting Irish (1-0) poured in 58 points in the second half, while limiting the Bobcats to 27, ultimately shooting just over 60 percent in the game.

Maya Dodson made her official debut in an Irish uniform and certainly made the most of it, scoring a career-high 25 points on 11-of-16 shooting. The grad transfer also collected four blocks and six rebounds. In addition, Sam Brunelle recorded 20 points in 17 minutes, shooting 8-of-10 from the floor, including 4-of-5 from three.

“Extremely excited to be back playing in front of our home crowd,” said Notre Dame Head Coach Niele Ivey. “That was the one thing I’ve been looking forward to. A dream come true for me. Collectively, just a great job from our group. We started off a little slow, but the in-game adjustments and how they turned it on in the second half was remarkable.”

Meanwhile, the freshman Citron impressed with a team-high seven boards to go with her six assists. Fellow freshman Olivia Miles dished out a team-best 11 assists. Tonight marked the first time a true freshman started at point guard since Lindsay Allen.

Notre Dame and Ohio traded shots in the first quarter as each side made nine field goals apiece, with the Irish just edging the Bobcats by period’s end, 24-22. All seven Irish who had checked into the game had points, led by Mabrey’s six. Ohio’s Cece Hooks had half of the team’s first-quarter points.

Irish made four out of five baskets around the second quarter media, earning some slight separation at 37-28. It was a Sonia Citron trey which capped off the Irish 7-0 run. Brunelle and Westbeld tacked on three-pointers of their own to maintain the Irish lead at the half, up 47-42.

The Irish were red hot to start the second half, converting 11 of their first 13 shots, outscoring the Bobcats 24-7 over the first seven minutes of the quarter and forcing an Ohio timeout. A quartet of Irish led the charge, with Maya Dodson leading the way with 10 points. Westbeld (4 points), Brunelle (7 points) and Mabrey (3 points) all supplied points during the run.

Ultimately the Irish exploded for 34 points in the quarter, on 14-of-19 shooting (.737), compared to the Bobcats’ 13. Dodson finished with 14 in the period on 6-of-7 shooting, while Brunelle also finished in double-digits with 10, which included a pair of treys.

In the fourth quarter, Nat Marshall got in on the fun with back-to-back baskets. Citron had the award for the smoothest basket of the night in her final jumper. In addition, walk-on Sarah Cernugel registered her first collegiate points.

The Irish have a quick turnaround, playing game No. 2 in less than 48 hours, hosting Western Illinois on Thursday night at 7 p.m.