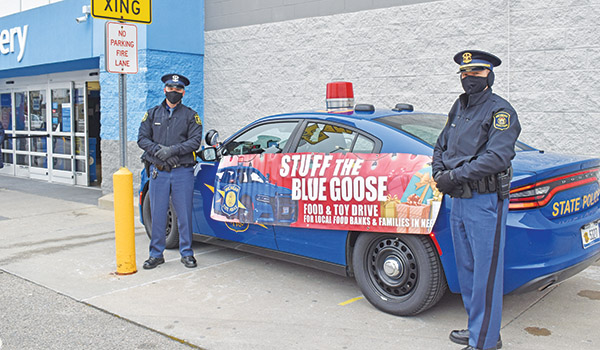 According to a January 2019 tweet from MSP First District, the term “Blue Goose” is a nickname troopers gave the MSP patrol cars shortly after the color scheme was updated from black and gold to bright blue in 1954. Troopers at the time dubbed it the “Blue Goose” in parody of Blue Goose Lines, a well-known commercial bus line of that time.

A blue MSP patrol car will be stationed outside of both Niles Walmart and Stevensville Meijer the day of, where troopers will volunteer their time to collect donations. Toys and gift cards collected will be distributed to both the Wonderland Toy Store in Benton Harbor and the Cass County Toys for Tots program, while the food and toiletries will be sent to both Helping Hands of Cass County in Cassopolis and Red Bud Area Ministries in Buchanan.

“Last year, we had a great turnout from the community,” she said. “We’re hoping to get the same type of turnout. People are stuck in the same spot they were last year and are not able to get a leg up.”

An eight-year member of the Niles Post, Higgs became the post’s community service trooper in 2019 and has coordinated the SABG event ever since.

“It’s an awesome change of pace,” she said. “It provides me with a new outlook on people in the community. I’m not seeing people on their worst days, anymore.”

According to Higgs, the onset of the pandemic did not deter the community from giving back.

Last year’s event saw the Niles Post fill six to seven patrol cars worth of goods, according to Higgs. She hopes this event will match or even surpass it.

“I really hope to see more of what we had last year,” she said. “The best thing about this is that everything comes into the community and stays in this community.”.

“My first year was a big learning curve,” she said. “Last year, even in the pandemic, people who can afford to give are very giving. People give what they can because they believe there are people less fortunate than them.”

For Higgs, the event provides the Niles Post with another opportunity to engage the community in a positive way.

“You get to meet a ton of people who stop by and drop off things,” she said. “It’s nice being able to talk to people without taking up their time and have positive interactions with people. Even if they don’t want to talk, we’re still present.”