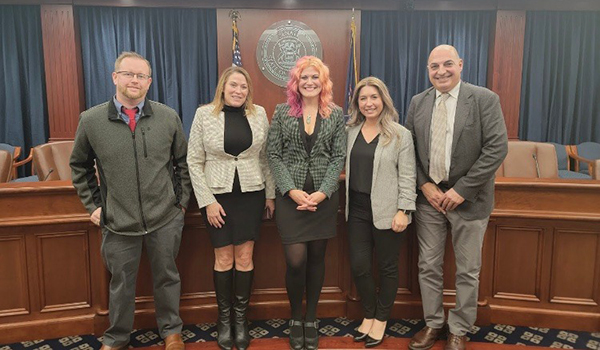 DOWAGIAC — A local barber went to Lansing last week to support industry colleagues as they achieved a milestone and ended up testifying before lawmakers.

Patrick Bakeman, owner of Bakeman Barbers, 101 S. Front St., was with members of the Michigan Association of Beauty Professionals Wednesday, Nov. 2 as they launched as an official 501(c) nonprofit association to be the voice of and unite a seemingly disparate group of barbers, cosmetologists, nail technicians, salon owners and other industry professionals who had no previous organization.

The MABP, led by founder and president Kristan Sayers, appeared before the Michigan House and Senate regulatory committees to testify about the state of the industry, licensing requirements and state the group’s intention to be a part of the legislative process involving salons and barbershops.

When Senate Regulatory Committee Chair Aric Nesbitt, R-Lawton, asked whether there was a combined program that could be done, Sayers – a salon owner and hairstylist – deferred to Bakeman.

“I know a lot of hairdressers would love to have a barbering license,” Sayers said. “But I think [barbers] might have a different opinion because it’s very nostalgic. It’s very different.”

Nesbitt then invited Bakeman, who completed barber college when the license requirement was 2,000 hours, to speak to the committee.

“That extra 500 was for the history of barbering, and for [using a] razor,” Bakeman said to the committee. “If you were to look at that pen in front of you, and think of it as a straight-edge razor, and then look at the person next to you, would you allow them to shave you off the street? That’s why we went to school for so long.”

The MABP – composed of salon owners, barbers, cosmetologists, small business owners and even chain salon owners from all over the state-assisted the Michigan Safe Start program for cosmetology and barber services after being forced to close during the pandemic.

Prior to that, at the same time, Sayers was organizing the MAPB, Bakeman was sending out letters to other barbers across the state, warning them of attempts by lawmakers to deregulate the industry by eliminating the licensure mandate.

The two eventually met, and after working together on the Safe Start committee, Bakeman joined the MABP because of its similar mission and Sayers’ stance against deregulation.

“For a lot of people, if it’s not in front of them they might not know what’s going on,” said Bakeman, who also is a member of the Dowagiac City Council. “Some new politicians that want to get a bill passed, they look at it like low-hanging fruit. … but we’re not over-regulated.”

In 2020, Rep. Steven Johnson, R, introduced a bill to repeal the licensure mandate for becoming a barber. This prompted a call from Bakeman.

The proposed legislation, House Bill 5438, never advanced. However, it was reintroduced again Oct. 20 of this year, but again has not advanced. To Bakeman, the association will help the government function as it should, working for the people who are a part of the industry.

With the industry’s newfound voice, Bakeman said he believes lawmakers in Lansing will listen.

“That’s how the government should work, and I feel like I saw that firsthand on Tuesday. It was a very good experience,” Bakeman said. “They were all very supportive. And I think, I think that people would be surprised that, you know, these people that represent us, they don’t want to get it wrong. They are mothers and fathers and brothers and sisters, right? They want to get it right, but if they don’t know, and they don’t hear from us as individuals in the state, they’re not going to know the right measures to take. So, it’s important that we do our civic duty.”

After returning, Bakeman reflected on his time in Lansing as a great experience.

“Sen. Nesbitt was really open and welcoming at the Capital, and I appreciated his attention to our issues and for his committee taking the time to let us be heard.”

On Nov. 4, two days after the MABP met with congress, a new barbershop bill was passed by the state with the provision that the 1,800 hours of education can be done via apprenticeship. To Bakeman, this is not the deregulation he is concerned about.

“The apprentice will only be as good as the professional they’re under,” he said. “I think it gives people another opportunity to become a barber, so they kind of have to make the best of whatever avenue they choose.”

What Bakeman and the MABP are going to focus on in the future is trying to keep their industry from being undercut by big business, and making sure their industry is able to maintain its high standards of professionalism.

“They were trying to take the professional out of the industry,” Bakeman said. “in my opinion, that would turn it over to big business.”

For fellow barber Wanda Price, who works at Bakeman Barbers, it is about her livelihood.

Bakeman said part of what the MABP will be able to do is keep an eye on the political landscape for the industry across the U.S., and speak up when legislation pops up at home.

“The last time I was told, in the United States there were 600 active bills about barbering and cosmetology, so when you think about that, would you ever, ever guess that? There’s a lot to the industry, and I think even more than what people can see.

“I think that’s where the association comes in. We had a bunch of voices, but we didn’t have one collective voice. That has been the driving force behind us.”