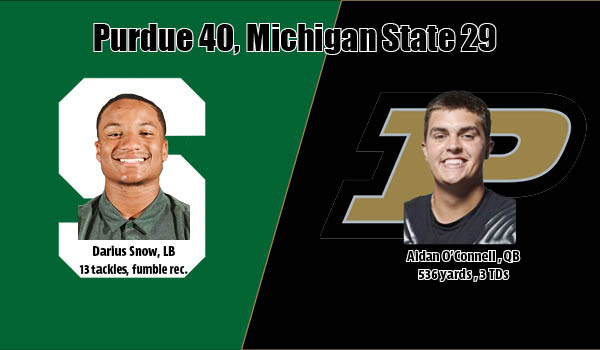 WEST LAFAYETTE, Ind. — Purdue handed No. 3 Michigan State its first loss of the season with a 40-29 victory over the Spartans on Saturday afternoon at Ross-Ade Stadium.

Kenneth Walker III, the nation’s leading rusher, led MSU (8-1, 5-1 Big Ten) with 146 yards on the ground, including a 14-yard touchdown on fourth down in the second quarter. Payton Thorne was 20-of-30 passing for 276 yards and two touchdowns. His favorite target on the day was Jayden Reed, who caught four passes for 73 yards. Tre Mosley had three catches for 44 yards, including a career-high two touchdowns grabs.

Defensively, Darius Snow collected a career-high 13 tackles, including 1.5 for losses and a fumble recovery. Xavier Henderson had eight stops, while Cal Haladay and Quavaris Crouch each posted seven tackles.

The Boilermakers outgained the Spartans, 594-458, led by Purdue quarterback Aidan O’Connell, who completed 40-of-54 throws for 536 yards and three touchdowns.

Purdue opened the game’s scoring by going 62 yards on nine plays on its first possession, capped by a third-and-goal pass from O’Connell to David Bell in the end zone for a 5-yard touchdown.

The Spartans responded on their next drive as Thorne hit Mosley in the end zone for a 26-yard scoring strike to tie the game at 7-7 with 6:23 left in the first quarter.

Purdue regained the lead early in the second quarter, scoring its second touchdown on an 8-yard pass from O’Connell to Broc Thompson to make it 14-7 in favor of the Boilermakers.

With 4:50 remaining in the first half, Purdue extended its lead to 21-7 on Jackson Anthrop’s 39-yard touchdown scamper off a trick play.

On the ensuing series, Michigan State put together an 11-play, 69-yard touchdown drive just before halftime. With the Spartans facing a fourth-and-2 from the Purdue 14-yard line, Walker raced to the right side and sprinted into the end zone for a 14-yard touchdown, cutting the deficit to 21-14 at the 1:04 mark. Walker had 17 carries for 103 yards in the first half for MSU.

Purdue turned the ball over on a fumble on its first series of the third quarter — which was forced by Jeff Pietrowski and recovered by Snow — and the Spartans took advantage. On a third-and-2 play, Thorne kept the ball on a read-option and scored on a 32-yard touchdown run, tying the game at 21.

The Boilermakers went back ahead, 28-21, at the 9:31 mark in the third quarter on a 1-yard TD run by King Doerue. Bell was at it again on third-and-10 on Purdue’s next series, catching a pass for 50 yards that set up a 29-yard Mitchell Fineran field goal to put the Boilermakers on top, 31-21. Bell finished the game with 11 catches for 217 yards.

Although the Spartans held Purdue to a field goal early in the fourth quarter after a first-and-goal situation, the Boilermakers still ran 7:14 off the clock and capped a 14-play, 60-yard drive with a 24-yard Fineran field goal that made it 34-21.

The Spartans drove the ball to the Purdue 9-yard line on their next possession, but a Thorne interception on fourth down kept the Spartans off the scoreboard.

Fineran connected on his third field goal of the game with 6:48 remaining to put Purdue ahead, 37-21.

Michigan State made it a one-score game by driving 83 yards on just eight plays, capped by a Thorne 17-yard touchdown pass to Mosley, and Maliq Carr caught the 2-point conversion pass to cut the deficit to 37-29 with 5:03 left.

However, on Purdue’s next play from scrimmage, O’Connell found Doerue for a 46-yard screen pass, which led to Fineran’s fourth field goal from 22 yards out, which sealed the victory for the game Boilermakers with just 41 seconds on the clock.

Michigan State returns to action Saturday to face Maryland in Spartan Stadium. Kickoff has been set for 4 p.m. and will be broadcast on Fox.