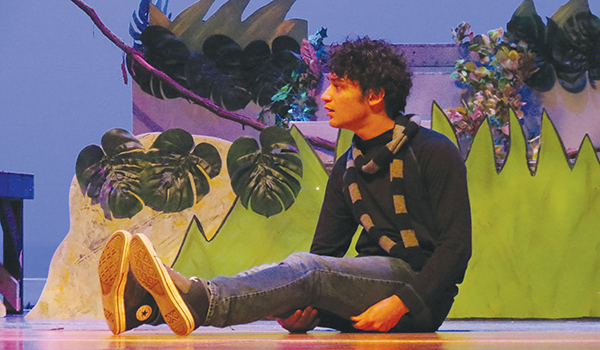 DOWAGIAC – “Sometimes we owe our successes as much to our enemies as we do to our friends” is the moral of the tale of the newest production to be performed by local high school drama students.

The Dowagiac Drama Club’s performance of “The Jungle Book” debuts next weekend at the Dowagiac Middle School Performing Arts Center, 57072 Riverside Dr. There will be three performances at 7 p.m. Friday, Nov. 12 and Saturday, Nov. 13, as well as 3 p.m. Sunday, Nov. 14.

This adaptation of the Rudyard Kipling book intersects the familiar “Jungle Book” story of Mowgli — a young Indian boy who is raised by wolves, befriended by Bagheera the panther and Baloo the bear, and threatened by Shere Kahn the evil tiger — with the life of a young Kipling, sent from his home in Bombay, India to a British boarding school in the 1890s.

In the play, while writing for a short story competition at boarding school, Kipling encounters personalities, which end up paralleling the animal characters he creates for the “Jungle Book.”

“He’s not very well-respected by some of the kids in his school. They pick on him for being different,” said director and DUHS English teacher Tammy Mammel. “So that kind of gets him frustrated, and he creates some characters around the personalities of these school chums.”

Kipling, played by Clayton Miller, turns his tormentors into villains in his story. Fielding becomes the evil Shere Khan, characters played by Jean Potter. Tabaqui, a jackal loyal to Shere Khan, represents a schoolmate called Hanley. Both are played by Calvin Diamond.

Miller, who plays Kipling, also plays Mowgli as the lead of the play.

“He’s amazing,” Mammel said. “I was floored at how quickly he was able to get his lines memorized.”

For the students playing both an animal and human, Mammel said she has been impressed.

“[Shuur] was really instrumental in helping me try to figure out how I was going to cast this show,” Mammel said.