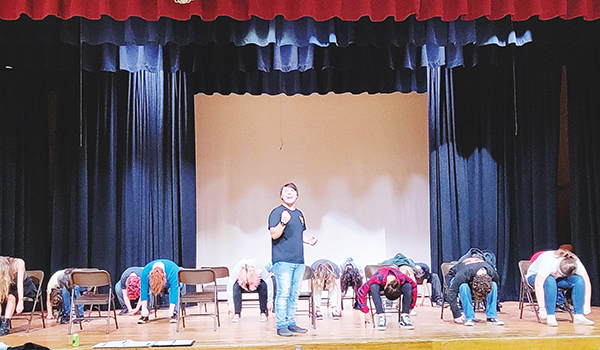 NILES — Students from Brandywine Middle and High School are preparing to hit the jackpot with their first in-person musical performance since the pandemic began.

The schools’ musical group will be performing “Guys and Dolls Jr.”  at 7:30 p.m. Thursday, Nov. 18 through Saturday, Nov. 20 — including a special matinee performance at 3 p.m. Saturday — at Brandywine Elementary School.

Tickets are $6 at the door and $5 for students and seniors, while reserved seating is $8.

Based on the award-winning Broadway classic by Damon Runyon, “Guys and Dolls” tells the story of some harmless gamblers, a dedicated missionary and a chronically engaged dancer as they try to find their place in the big city — and some romance along the way.

“After not having an in-person show last year, we wanted to do a show with a good name draw from the classical Broadway age,” said Kevin Smith, director. “We were hoping to increase student participation and audience involvement. It’s great when we’re able to present a story that hasn’t been told recently. Some of the older stories get forgotten.”

Roughly 40 cast and crew members began rehearsing for the musical in early September. According to Smith, the students are enjoying putting the project together.

“They have been connecting with the show,” he said. “The cast did a song preview at a choir concert and the audience enjoyed that. It’s a fun, satirical show and the students are having fun working on it.”

Smith has been teaching in the Brandywine district for seven years and has been music director for two years, a role he enjoys.

“I enjoy taking an idea written on paper, giving it to the students and watching them bring it to life,” Smith said. “Moments like that remind me why I do this.”

As the date of the first show draws near, Smith hopes the community will show its support to the students and their work.

“It’s always great when the community supports art programs,” he said. “It’s an outlet these kids can’t get anywhere else. Our cast has cheerleaders, athletes and kids involved in all sorts of things, but the musical gives them an artistic outlet they don’t get elsewhere. We have students where the musical is the only thing they’re involved with. Those students slip through the cracks when they don’t have this outlet. We’re very excited to share this show with the community.”