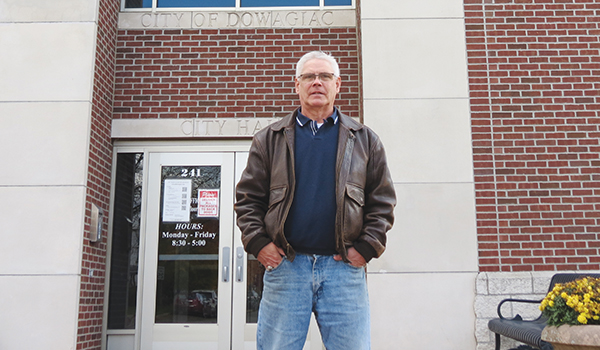 DOWAGIAC – There will be a new face representing the citizens of Dowagiac at its next city council meeting.

James “Jim” Kurdelmeyer was elected Tuesday in an uncontested race to replace Leon Laylin as third ward city council member. Laylin, 83, decided not to run after 24 years on the council.

Born and raised in Dowagiac, Kurdelmeyer graduated from Dowagiac Union High School in 1978. During his time at DUHS, he wrestled, played football and ran track. He went on to graduate from Ferris State University with a degree in education and a minor in psychology.

After working administrative positions in the Bangor and Stevensville area after college, Kurdelmeyer and his family decided to move back to Dowagiac in 2002, when he began working for the city of Dowagiac in the wastewater department. After four years of that, he switched to working as an electrical and water service
technician.

Kurdelmeyer retired from the city in January and believes his experience working for the city will help him as a council member.

“I can bring more to the table because I’ve been down in the trenches for all those years dealing with it,” he said. “I’ll have a little more of an insight taking it in [to council]. They’ll ask something, and I may be able to say ‘well, that’s not true.’”

Kurdelmeyer said he has a couple of projects in mind for what he wants to accomplish – though he admits there will be a learning curve as he adjusts to the position.

“First, I’m going to get my feet wet,” he said. “At first, I’m going to keep my mouth shut and learn how everything works. You don’t want to come in there like a bull. Down the road, there are a couple of things I’d like to do, like put a sidewalk down Hill Street because those kids coming to junior high are walking down the roads. … Someone’s going to get hit.”

Kurdelmeyer’s family moved from Iowa to Dowagiac in the 1950s, and he said when he was young, working for the city was never something he considered. However, in his years working for the city of Dowagiac, he said has made many friends along the way, and even in retirement would stop in to say “hello” to his former co-workers.

Though his election was uncontested, Kurdelmeyer was encouraged to run by fellow council member Patrick Bakeman.

“I’ve known Jim Kurdelmeyer for over 15 years, and he has always been a good family man who is devoted to his sons and with taking care of other members of his family,” Bakeman said. “He has always been a hard-working person. His career working for the city should give him a good insight into the community. I look forward to working with him and furthering Dowagiac as a great place to live, work and play.”

In other election results:

• Mayor Don Lyons was reelected in an uncontested race.

• Latoi Wilson, treasurer, was reelected in an uncontested race.