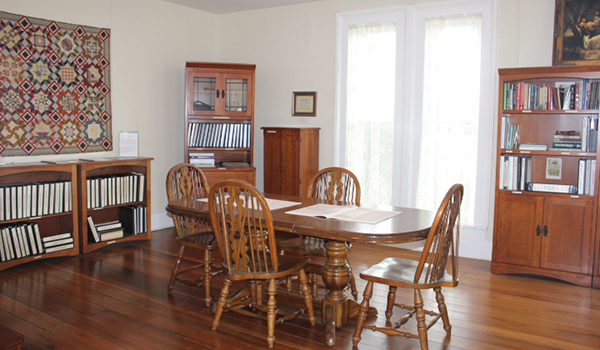 CASSOPOLIS — The Underground Railroad Society of Cass County recently announced that the URSCC Collection has been accepted by Western Michigan University Archives and Regional History Collections Library in Kalamazoo.

This ensures that the story of the Underground Railroad in Cass County, and the research of historians that informed this story, is safeguarded for posterity and available to future generations to study, URSCC officials said.

URSCC began collecting documents from many sources as soon as it was formed in 2009.  In 2012-2013, Mary Anne Bonine did primary research on the local families on the 1840, 1850, and 1860 census that participated in some way in the Underground Railroad.

From 2015-2018, the documents were organized, digitized and copied by URSCC members, and the Bonine House UGRR Research Library was formed, accessed upstairs in the Bonine House, and on the URSCC website, urscc.org. The library contains the work of these historians, as well as much more. The 1847 Kentucky Slave Raid, Ramptown, the 102nd USCT, the story of Calvin Township, UGRR in the region, Canada and Indiana and more are well documented.

URSCC is restoring the Bonine House, the Bonine Carriage House, and the Bogue House as focal points for telling this compelling story.  They are open for tours from June through October.

“WMU accepting the URSCC Collection not only safeguards this story forever, it validates it,” said Mike Moroz, president of URSCC. “These historians, Cass County histories, scholarly dissertations, like Dr. Ben Wilson, Debian Marty and others, and decades of newspaper and magazine articles, all tell the same story. We at URSCC are very gratified to have been able to gather the many pieces and present them to the world, telling this story of a community who did what was right under very difficult circumstances, demonstrating the bravery of both the freedom seekers who passed through here, and the bravery of Quakers, Free Blacks and others who helped them on their journey to freedom. We are very proud and grateful to have the URSCC Collection at WMU.”