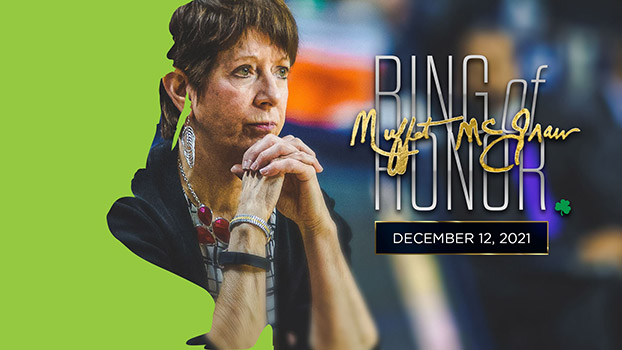 NOTRE DAME, Ind. — A Naismith Memorial Basketball Hall of Famer and a two-time national champion former Notre Dame women’s basketball head coach Muffet McGraw has earned countless distinctions and accolades over her legendary career. To honor her, the next women’s basketball Ring of Honor inductee is none other than coach McGraw.

“It is my honor to announce that we will be inducting Coach Muffet McGraw into this year’s Ring of Honor,” said Notre Dame Head Coach Niele Ivey. “In the last 33 years, not only has Muffet transformed our program into an elite powerhouse, won two national championships, attended nine Final Fours and produced countless All-Americans and several WNBA All-Stars, but she also has left her mark on women’s basketball, etching herself into Hall of Fame lore.

“She is legendary, she is excellent and she deserves to be celebrated for all of her accomplishments on and off the floor. She is a force and inspiration to all women. I’ve always admired her strength and ability to strive for excellence in her career while balancing motherhood. I’m so grateful that I have learned and been mentored by her as both a player and coach. I am forever grateful for what she’s done for me and what she’s done for Notre Dame women’s basketball. I’m so proud to be a part of her legacy and excited to continue to follow in her footsteps.”

McGraw’s Ring of Honor ceremony will take place before Notre Dame’s home matchup against Purdue-Fort Wayne on Dec. 12. That contest tips off at 2 p.m.

“Any honor I receive is thanks to all the amazing women I’ve had the pleasure of coaching, and working alongside over the past 33 years,” McGraw said. “It’s been a privilege to coach in front of the best fans in basketball. The Ring of Honor is a chance to reflect on some great memories with the people who helped make them some of the best times of my life. The thing that makes this really special is sharing it with the people I care about. I hope our fans will join me for one last celebration of what we accomplished together.”

On April 22, 2020, Muffet McGraw stepped down after 33 years at the helm of the Fighting Irish program and 38 total years coaching (started her career at Lehigh). McGraw’s 936 career wins rank sixth all-time among Division-I head coaches with 848 of those coming at Notre Dame.

A three-time consensus National Coach of the Year, McGraw not only built a women’s basketball power, but inspired a passionate fan base within the local community. The Irish recorded 57 total sellouts and ranked among the Top 10 in the nation in attendance in each of McGraw’s 14 last seasons. In fact, Notre Dame posted an impressive 411-68 record inside Purcell Pavilion under McGraw.

Furthermore, Muffet led Irish squads accumulated 14 regular-season conference titles (including eight in a row from 2012-19) and 11 conference tournament championships (including six in her last eight years). She has also earned seven conference Coach of the Year honors across five leagues.