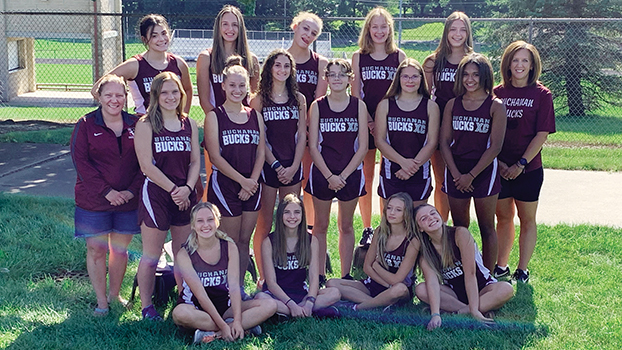 The Bucks, who finished fourth last year at the pre-regional, but did not advance out of the regional, finished as the runner-up behind BCS Athletic Conference foe Bridgman at the regional hosted by Portage Central Saturday.

The Bees were the regional champion with 51 points, while Buchanan was second with 61 points and Schoolcraft third with 99. Brandywine finished 11th with 271 points.

Coloma’s Ava Genovese was the individual champion as she crossed the finish line in a time of 19:55.

Buchanan freshman Madeline Young finished fourth to lead the Bucks with her time of 20:52. Cousin Eleanor Young, a sophomore, was right behind her in fifth place with a time of 20:57. Freshman Emma Miller also cracked the top 10 with a ninth-place finish and a time of 21:23.

Brandywine senior Allison Lauri also qualified for the state finals with her 15th place finish and a time of 21:37. The top four teams qualify for the finals, as do the next 15 individuals who are not on a qualifying team.

Buchanan senior Walker Barz is heading back to the state finals as he finished sixth overall with a time of 17:22. The Bucks did not have enough runners to post a team score.

Coloma was the boys champion with 55 points. Saugatuck was second with 61 and Constantine third with 88. Brandywine did not have enough runners as well to post a team score.

Niles sophomore Aiden Krueger split time between tennis and cross country this season, but that did not keep him from qualifying for the Division 2 state finals at Michigan International Speedway this weekend.

Host Otsego won both the boys and girls team championships. Three Rivers was the boys runner-up, while Zeeland East was the girls runner-up. Edwardsburg finished 13th in the boys division and eighth in the girls division.

Edwardsburg’s Charlie Drew also finished 18th in the girls race, but just missed out on qualifying for the state finals. She finished with a time of 20:43.

Cassopolis qualified a runner in each of the Division 4 races, but did not have enough runners to post team scores at the regional Saturday.

Senior Lauren Anderson will be making her fourth consecutive appearance in the state finals. She finished seventh overall at Portage Central Saturday with a time of 21:23 to advance to the state meet, which will begin at 9:30 a.m. at Michigan International Speedway.

Junior Jaren Waldschmidt finished 16th overall with a time of 19:54 to advance to the state finals.

Decatur’s Andrew Confer also earned a spot in the finals as he finished 19th overall with a time of 20:07.