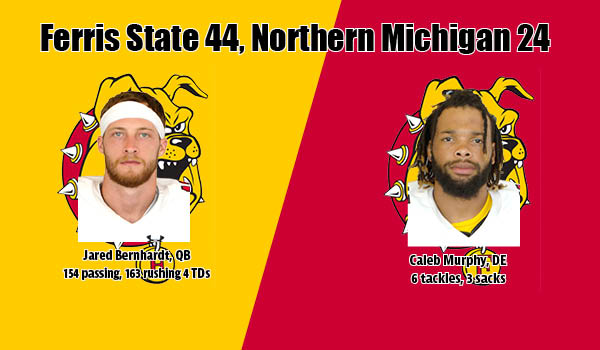 Senior quarterback Jared Bernhardt ran for a game-high 163 yards and three scores while completing 10-of-14 passes for 154 yards in the win. The victory came in FSU’s first home contest in more than a month.

Ferris State’s win was its 36th-straight in the regular season, dating back to 2017 and the Bulldogs’ 29th consecutive GLIAC victory. Ferris State moved to 8-0 overall and 5-0 in the GLIAC with the win.

The Bulldogs started strong, building a 20-3 halftime lead in the game. FSU struck first with 7:02 to go in the first quarter as junior Evan Cummins recorded the first score of the day with a one-yard plunge to finish off a nine-play, 82-yard drive.

Northern Michigan cut the margin to 7-3 after one with a 24-yard field goal by Daniel Riser with 4:39 remaining in the opening stanza, but that would be the only points the Wildcats would manage until the second half.

Ferris State pushed the lead to three scores at halftime as Bernhardt scored twice in the second period on runs of four and seven yards, respectively. Both came on short drives of less than 38 yards, one via a turnover and one after a fourth-down stop by the defense.

In the second half, Ferris State pushed the lead to 30-3 as Bernhardt found pay dirt for a third time from three yards out to finish a 10-play, 80-yard march. FSU then added three more points on a 29-yard field goal by junior Sy Barnett.

The Wildcats managed to pull within 30-10 after three quarters after a one-yard scoring run from quarterback Drake Davis in the final minute of the period.

However, Ferris State opened the fourth quarter by moving 75 yards in four plays, with tailback Jeremy Burrell reaching the end zone on a 14-yard run to make it 37-10 with 14 minutes left in the game.

The Wildcats answered with a 75-yard jaunt of their own, which ended on Tyquan Cox’s 19-yard TD reception from backup quarterback Zach Keen.

Cummins later tossed a three-yard TD pass to slot receiver Marcus Taylor in the end zone, who found a way to catch the ball after it was knocked in the pair by a NMU defender trying to make an interception. The final score of the day came with only 3:33 left when Cox hauled in an 11-yard scoring throw from Keen to account for the final margin.

Northern Michigan finished with 289 yards of offense, but only 105 yards rushing on 39 attempts. The Bulldogs’ defense also forced one turnover and came up with six sacks in addition to limiting the Wildcats to a four-of-13 showing on third down. Former Dowagiac standout Caleb Murphy had six tackles and three of those six sacks.

Ferris State will play its final regular-season road contest next Saturday, Nov. 6, against fellow West Michigan foe Davenport in Caledonia. Kickoff for the second matchup of the season between the Bulldogs and the Panthers is set for 12 p.m. FSU can clinch at least a share of a third-straight GLIAC Championship with a victory next week.