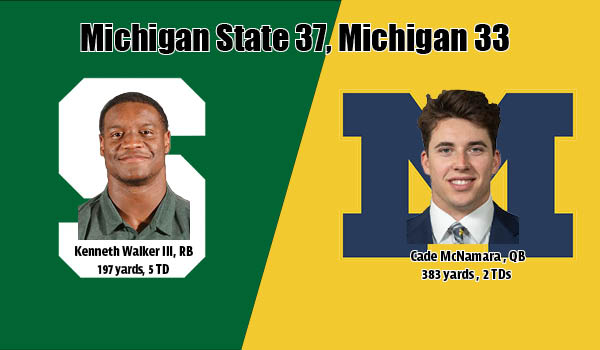 EAST LANSING — Michigan State running back Kenneth Walker III scored five touchdowns, including what proved to be the game-winning score from 23 yards out with five minutes left in the fourth quarter, as the No. 8-ranked Spartans fought back from a 16-point deficit to beat No. 6-ranked Michigan, 37-33, in front of a sellout crowd of 76,549 at Spartan Stadium Saturday afternoon.

Walker finished the day with 23 carries for 197 yards and five touchdowns, three in the second half and three for 20 or more yards (27, 58 and 23 yards). The five touchdowns were the most in the 114-game series history between Michigan State and Michigan and were the most ever by any opponent against Michigan.

Junior linebacker Quavaris Crouch led Michigan State on the defensive side with 13 tackles, while redshirt freshman linebacker Cal Haladay and sophomore safety Darius Snow each had 10 tackles and senior safety Xavier Henderson had seven tackles, including one for loss.

Michigan got on the scoreboard first as Cade McNamara hit Andrel Anthony on a third-and-5 play deep in Wolverine territory for a 93-yard touchdown pass to make it 7-0 early in favor of the Wolverines.

The Wolverines recorded their second interception of the day on MSU’s third series, and took advantage of good field position at the Spartan 35 following an MSU penalty as Jake Moody connected on a 26-yard field goal to put Michigan on top, 10-0, with 1:18 remaining in the first quarter.

Walker capped a five-play, 75-yard drive with a 27-yard rushing touchdown on the first play of the second quarter to cut the deficit to 10-7.

The Spartans went 75 yards on six plays on their next series to take a 14-13 lead with 7:16 left in the half. On fourth-and-1 from the Michigan 48, Thorne found Nailor for 40 yards, and on the next play, Walker found the end zone for the second time of the afternoon with an 8-yard score.

Michigan took a 23-14 advantage into halftime after Andrel caught his second TD pass of the day from 17 yards out and Moody connected on his third field goal from 35 yards as time in the second quarter expired.

The Wolverines extended their lead to 30-14 on their second series of the third quarter as McNamara found Mike Sainristil for a 19-yard touchdown pass on a third-and-7 play.

MSU responded on its next series, capitalizing on another fourth-down conversion, to make it a one-score game at 30-22 at the 3:58 mark in the third. Facing a fourth-and-4 on the Michigan 29, Thorne hit Reed on a 28-yard pass to the 1-yard line, and Walker scored on the next play on a 1-yard run for his third score of the game.

Walker’s fourth touchdown of the game came on a 58-yard scamper early in the fourth quarter. The Spartans converted their second two-point conversion of the game as Thorne hit Reed in the corner of the end zone.

Michigan took over with 12:29 left on the clock and used six plays to move near the MSU 20-yard line, but the Spartans defense held and the Wolverines took a 33-30 lead on a 36-yard field goal from Moody.

The Spartans were forced to punt on their next possession, but on Michigan’s first play, quarterback J.J. McCarthy fumbled and it was recovered by MSU defensive end Jacub Panasiuk at the 41-yard line. Taking over with 7:12 to play in the game, the Spartans picked up a pair of first downs before Walker broke free for a 23-yard touchdown, giving MSU a 37-33 lead with 5:08 to play.

The drama wasn’t done.  Michigan drove to the MSU 31-yard line before turning over on downs with just under two minutes left.  After the Wolverines contained MSU, the Spartans punted, and Michigan took over on its own 33-yard line.  Near midfield after a penalty, Cade McNamara’s pass was intercepted by Charles Brantley with just over a minute left, sealing the win for the Spartans.