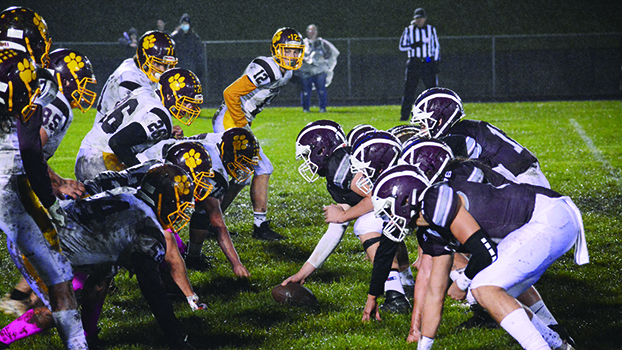 UNION CITY — The first quarter did not go the way the Brandywine football team envisioned.

The Bobcats had two turnovers in the frame that led to two Union City touchdowns as the Chargers went on to win 24-0 in a rain-soaked, muddy Division 7 pre-district game Friday night at Alumni Field.

“We did not start well,” said Brandywine coach Mike Nate. We had three turnovers in the first half. They scored 18 points off those three turnovers and that was a ball game.”

A Brandywine fumble on fourth down gave Union City a first and 10 on the Brandywine 15-yard line. On the next play, Owen Jackson took the ball into the end zone for a 15-yard score to put the Chargers up 6-0 less than three minutes into the game.

On the ensuing possession, a Brandywine fumble lead to a Garrett Iobe 8-yard touchdown score a few plays later.

Just like that, the Bobcats were down 12-0 less than four minutes into the game. Following a Brandywine turnover on downs at its own 27, a 6-yard Jackson touchdown run gave the Chargers an 18-0 halftime lead.

The Chargers did not score again until a 2-yard Terrance Morgan Jr. touchdown run on fourth-and-two put Union City up 24-0 with 2:20 left in the game.

“When you don’t score, you’re not gonna win,” Nate said. “It wasn’t one wasn’t one of our better games offensively, that’s for sure, and a lot of that had to do with [Union City].”

“There’s nothing to hang our head about because we played hard,” Nate said. “I thought the defense played well tonight. They were on short fields for a couple of those scores and the turnovers killed us.”

While the loss was a tough pill to swallow for the Bobcats, he remains proud of his team’s accomplishments. The Bobcats graduate seven seniors from this year’s team, which notched victories over rivals Buchanan and Cassopolis as well as a win over defending Division 8 state championship Centreville in Week 1.

In total, seven of Brandywine’s nine regular-season games were against playoff teams.

“I’m so proud of this team,” Nate said. “We had the big win against Centreville, we beat Buchanan to spoil their homecoming and made it to the playoffs last week against Benton Harbor. It’s been a great season for these kids. It goes down as a 4-6 season but they had a wedding season in my book. With the schedule we played, it was pretty darn good.

“This wasn’t our night out here in the mud.”