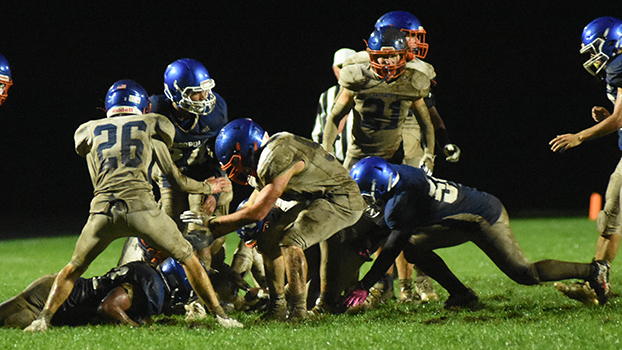 The Rangers dressed just 17 players for the rematch of the 2017 Regional championship game against the Trailblazers. Two key players — Reggie Hart and R.J. Drews — did not dress for the game due to injury. In all, Cassopolis was missing six starters.

Those two players — the Rangers’ leading tacklers on the season — were missed on defense the most, where Cassopolis could not stop the Saugatuck running game in its 28-8 loss.

The Trailblazers ran for 323 yards against the Rangers on an extremely wet and slippery field. Ben Drew ran for 125 yards on 17 carries and scored a pair of touchdowns, while Saugatuck’s leading rusher heading into the contest, Benny Diaz, added 96 yards on 11 carries. John Hartgerink finished with 66 yards on 11 totes with a touchdown.

The Trailblazers (6-4) took the opening kickoff and marched down the field on the Rangers, scoring on a 26-yard run by Drew, which capped off the 65-yard drive. Saugatuck would also score on its other two possessions of the first half as Hartgerink added a 1-yard run and Drew scored on a 4-yard run.

The final two scoring drives in the first half for the Trailblazers were more than 70 yards.

Trailing 20-0 at halftime, Cassopolis came out of the locker room and opened the third quarter with some energy and determination.

The Rangers went 72 yards to score on a 22-yard Jeremiah Williams run to cut the Saugatuck lead to 20-8.

That would be as close as Cassopolis would get as the Trailblazers, after stopping the Rangers on downs at its own 41-yard line, took over and went 55 yards in 12 plays to score the game’s final touchdown — a 1-yard quarterback keeper by Brogan Kelley.

Cassopolis (5-5) finished the night with 209 yards rushing, led by Williams’ 122 yards on 22 carries. Daishean Jamison, who had some big runs early, was kept in check the final three quarters, finished with 86 yards on 17 totes.

Defensively for the Rangers, who were playing four freshmen on defense at times, was led by freshman Jaden Ivery, who finished with a team-high 10 tackles. Alek Dahlgren had seven stops, while Davion Goins, Jadyn Brown and Will Smith, another freshman, had six tackles. Williams recovered a fumble.

Saugatuck advances to the Division 8 District championship game at White Pigeon. The Chiefs are 9-1 after defeating Decatur (4-6) 20-0 Friday night.