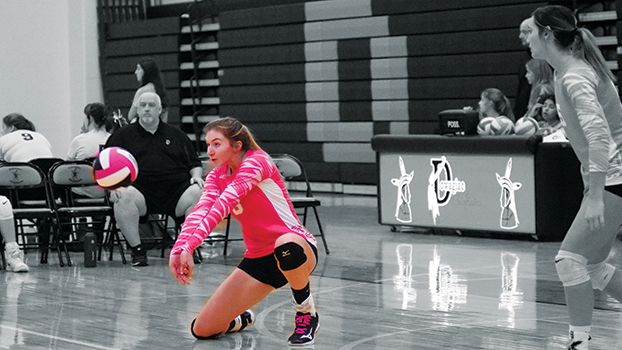 DOWAGIAC — The postseason is never supposed to be easy, but for the schools in the Division 2 and Division 3 district volleyball fields, winning a championship will be no small feat.

Each district has at least three teams that are capable of winning a district championship. While the state rankings might not reflect the quality of the fields, one only has to look at the records to see how strong the teams are.

Edwardsburg may be the defending district champion, but the Eddies will have several teams looking to unseat them, including host Dowagiac and No. 6-ranked (Prep Dig) Niles.

All three teams are members of the Wolverine Conference. The Eddies were defeated by both the Chieftains and the Vikings in league matches this season.

Edwardsburg Coach Nikki Bush is looking for her team to play up to its capabilities in the postseason.

What do you have to do to win the district championship?

“Step up and perform,” she said. “We’ve been inconsistent all season between sets and full-on matches. We need to be consistent from point one to the end of the match.”

Bush feels that the district is wide open.

“Every team there,” she said. “Anyone can upset or beat anyone. We dropped to Dowagiac during conference. We’ve dropped to Niles a few different times. We just have to keep our heads down, focus on our strengths and play our best.”

Niles (43-8) enters the district as the favorite. The Vikings are battle-tested, having played in numerous tournaments this season that featured a lot of ranked teams.

Veteran Niles Coach Jenny Nate said her team does not look past anyone, so another matchup with the Eddies in the district final is not the team’s focus.

“My philosophy is respect every opponent, and every team we might potentially face has unique strengths — some are scrappy, some have a big block (triple), some run a faster offense, etc.,” she said. “We have studied every aspect of every team, so I go back to the premise that we focus on our energy, our level of play, our attacking strengths, our strong defense, our block, our ability to see the court, and our consistency. Our total focus is in our team only and on playing to win.”

Coloma and Benton Harbor will open district play at 5 p.m. Monday, with the winner advancing to face Niles in the semifinals at 5 p.m. Wednesday.

“I have studied the other teams in the field, and as always, we are focused on playing Niles ball with a focus on controlling the match, the tempo, the runs, and playing to win,” she said. “We need to focus on what we control — our side of the court. We will come out of the gate swinging with energy, playing to win and ready to defend based on attack tendencies.”

The championship match is scheduled for 6 p.m. Thursday.

The Chieftains (24-13-6) were scheduled to face the Shamrocks at a quad it was hosting, but Berrien Springs pulled out at the last minute.

Dowagiac defeated Coloma 2-0 Wednesday night at its Pink Out Quad, while it defeated the Eddies 3-2 earlier this month. Niles swept the Chieftains in the final Wolverine Conference match of the 2021 season Oct. 21.

“I do not want to look past anybody, but we are kind of looking forward to a rematch with Edwardsburg,” Hooley said. “We will have to play big again. We are capable of putting a scare in a lot of teams if we play consistently and pass the ball well.”

At Bridgman, any one of four teams could walk away with the district championship.

Not only will the host Bees be in the mix, so will BCS Red Division champion Buchanan, Brandywine and Watervliet.

The Bobcats and Panthers will open up play at 6 p.m. Monday with the winner advancing to the semifinals to face Buchanan at 5:30 p.m. In the other semifinals, Bridgman will take on Southwest 10 Conference runner-up Cassopolis.

Brandywine Coach Emily Zablocki-Kohler believes that consistency is the key.

“To win the district championship, we have to play tough, consistent volleyball as a collective team,” she said. “We have to rely on our own abilities and our teammates’ abilities and play together.”

The Bobcats and Panthers are no stranger to each other having played already this season.

“We lost a close match to Watervliet at the St. Joseph tournament a couple weeks ago,” Zablocki-Kohler said. “I think we have a pretty good idea of what to expect from them, as well as their strengths and weaknesses. I think we are our own biggest challenge and staying consistent in our play will be our biggest challenge of the districts.”

Buchanan Coach Shelly Bossert, like Zablocki-Kohler, said her team, which has defeated every team in the district field except for Watervliet, scrimmaged, must play consistently.

Bossert said she and her team would use the bye to scout Brandywine and Watervliet Monday night.

“We played them [Watervliet] once in a scrimmage,” she said. “I have heard that both teams are similar in their playing styles. Both teams present different challenges. I know that both teams have some great hitters, so we will have to be ready to block and play good defense,”

Second-year Cassopolis Coach Kaisha Martin is pleased with how her team has improved from last year and is hoping her players believe in themselves come Wednesday night.

“In order to win the district championship, we have to play like we want to win and put everything we have on the court,” she said. “I am okay with getting a bye in the first round because it gives my players more time to prepare. I feel like we get to go back to the drawing board and figure out our options and game plan to win districts.”

The championship match at Bridgman is scheduled for 6 p.m. Thursday.