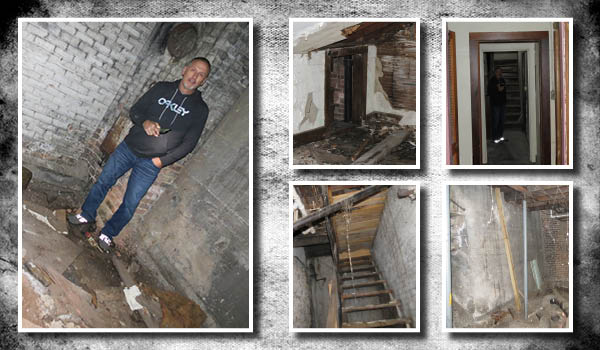 DOWAGIAC – According to Wounded Minnow owner Kyle Belew, there have been some strange occurrences at his restaurant over his 26 years as owner of the building, and he was finally spooked enough to call for help.

Instead of calling the Ghostbusters, he called Buchanan’s Shadow Spirit Paranormal investigation team – led by Rose Ferrell, Rick Ferrell and Jason Dils – to lead an investigation of his establishment on Saturday, Oct. 23. What the team found has only left Belew more certain that something supernatural is happening at the Wounded Minnow.

Belew said the strange activity has been increasing as of late. On the Fourth of July, Belew and fiancée Jackie Linn were the only ones in the bar when Linn thought she heard Belew calling for her — only he was not there.

“Everyone who has worked here has some kind of memory of something spooky,” Belew said. “I’ve never been in tune with anything like that, but these last four months have been really weird.”

Belew said he has seen lights turned on in the old Elks Lodge theater above the restaurant, envelopes going missing on multiple occasions, things blowing off the shelf in the kitchen, a phantom voice saying Linn’s name and an inexplicable heaviness felt in the basement, to name a few.

“We’ve seen, late at night, orbs – the same two orbs – come out of the chimney and float down this wall and go right into the basement,” Belew said. “That’s the side of the boiler room. … I’ve seen these multiple times, and they don’t go fast. It takes them 30 seconds to go 60 feet.”

Wounded Minnow employee Kara Safranek said she has video of two white figures going out into the kitchen from the back room behind the kitchen.

“There’s always been a joke that there’s a kitchen ghost. It was pretty cool that we kind of confirmed it,” she said. “The boiler room downstairs we call the Freddy Krueger room. Our last kitchen manager wouldn’t even go inside.”

With the aid of a K-II Electromagnetic Field meter, an Ovilus device and other technology, the investigators, Belew and Linn descended into the basement of the Minnow. Once they got to the boiler room – a dark, dank room filled with decades of rubble, wires and twisted metal – they turned on the Ovilus.

The Ovilus machine is programmed with words and syllables, that allegedly allow “spirits” to communicate with users using changes in temperature or magnetic fields. When the machine produced the words, “Jackie,” “wear” and “black,” – Linn happened to be wearing a black shirt – the group was alarmed.

“With her name being said, and we’ve found out other people have heard their names,” Belew said. “We’ve also had some physical things happen in the past few months. … I don’t know what it is.”

As the crew explored the remains of the dusty Elks Lodge upstairs, a device called a Structured Light Sensor camera – which produces a “stick figure” image purported to be a spirit – was used to detect a figure in between Linn and Rose Ferrell as they stood near an old dumbwaiter.

“The temperature dropped so much within just that time it was unreal,” Linn said. “It was a huge change in temperature.”

Another stick figure appeared on a table, but when Belew said he tried to touch it, it moved away.

“You could see the figure. It sounds funny, but it looked like it was trying to box with him,” Linn said. “What I think it was is he was trying to get his hand away from him.”

Again, a wave of cold swept over Linn and Belew.

“I thought maybe it was my feet getting cold because its cold outside, but it wasn’t,” Linn said. “It was so weird. It was like someone was breathing freezer cold air on the back of my neck.”

The Minnow’s basement is filled with debris — decades-old rubble from previous occupants, old boxes, frayed wires and crumbling walls. The investigators’ EMF meter showed high measurements of EMF, and both Linn and Belew said they both did not feel well after the day after the investigation.

“I was driving from Mishawaka to Dowagiac, and I could barely keep my eyes straight. I don’t know if those things sucked so much energy out of me or what, but I’ve never been that tired,” Linn said, adding that she felt heaviness like a weighted blanket the when she went into the basement later in the night.

“That was the first night I was spooked. It had already mentioned my name, what I was wearing then, I had that crazy heaviness. Right there that was enough for me, and we left.”

The investigators’ recollection of events was similar.

“We opened the dumbwaiter, and heat came out,” Rose Ferrell said. “That’s when the stick figure interacted with Jackie and myself.”

As for the Ovilus machine, the investigators were surprised by the accuracy of what words came up.

“Sometimes the Ovilus will throw random words out, and because it’s so random, you have to decipher it,” Rose Ferrell said. “But with it saying ‘Jackie wear black’ back-to-back, with Jackie actually wearing black, it was kind of dead on.”

A  2009 study on the effects of chronic exposure to low-frequency EMF showed those exposed had poorer sleep, more severe depression and an increase in anxiety. The study, published in the scientific journal Electromagnetic Biology and Medicine, suggests that long-term occupational exposure to EMF may lead to these symptoms.

Similarly, sound below 20 hertz – called “infrasound” – cannot be detected by the human ear. However, some have reported feelings of dread or fear when exposed to these sounds, a phenomena known as “fear frequency.”

In 1998, British engineer Vic Tandy of Coventry observed feelings of fear as well as a visual “blob” in his vision. Upon further research, he discovered that nearby laboratory fan was running at 18.92 hertz, which is also roughly the same resonant frequency of the eye, according to a study by the U.S. Air Force.

After Tandy switched the fan off, he reported these feelings going away. His conclusion was the fan had caused both his feelings of fear as well as caused an optical illusion by vibrating his eye. His findings were published in the Journal of the Society for Psychical Research in a 1998 article called “The Ghost in the
Machine.”

As for Belew and Linn, they have been spending more time in the basement office, near the area with high EMF levels.

“I’ve had that office for 26 years,” Belew said. “I’ve always said it just sucks the life out of me down there.”

“Today I got down there, and it hit me hard again,” she said. “I just felt not good and just so tired. … It’s so strange.”

Could the boiler room be emitting a low-frequency EMF that causes Belew and Lynn to feel this way? Or is something else happening at the Wounded Minnow? Whatever the case, Belew said he is not taking any chances.

“These people have a cleansing person that’s going to come and cleanse the whole building,” he said. “I said, ‘I don’t care if you find anything or not. I want to have somebody cleanse it because maybe even psychologically that will help me. … The whole experience messed me up.”

For more information on Shadow Spirit Paranormal Investigation, visit shadowspiritparanormal.com or email them at basstrack2000@yahoo.com.