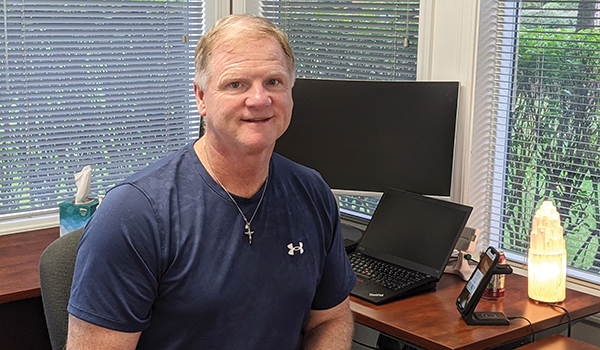 From patrolling the sidelines as a hall of fame basketball coach to being a life coach and best-selling author, Kevin impacted thousands of lives across the country before passing away from lung cancer in 2016.

Patrick has continued his late brother’s work in the years since, and will soon be releasing his own self-help book “Create Forever Teammates” Wednesday, Jan. 26, 2022.

“I am committed to my brother’s legacy,” Patrick said. “I’ve integrated some of my own things in it based on my own personal experience with coaching. On his deathbed, I promised him that I would continue on with this work, that it was important work. I want to reach as many athletes as I possibly can.”

Patrick was the head coach of Niles’ girls basketball team from 2009 to 2014, posting a 73-63 record which included a 0-21 season in 2012-13. That team consisted mainly of freshmen and sophomores, but laid the foundation for future Niles teams that achieved success starting with a 14-9 season the following year.

The Vikings won a pair of Class B district championships under Patrick’s direction and reached a pair of regional championship games.

After leaving Niles, Patrick was an assistant coach at Brandywine under Josh Hood from 2014 to 2017 and was named the Niles boys basketball coach in June 2019 before resigning in March.

The idea of writing a book of his own was daunting for Patrick, but at the same time, he felt his brother was with him every step of the way.

“When I first was putting pen to paper, I thought about writing something just from my perspective,” he said. “As I was writing it, I kept feeling this pull from my brother. It’s because of him that this work still continues. Kevin had a major impact on me personally and everything he taught me about what being a coach means. I thought I wanted this book to be about myself and probably two chapters in, I ripped it all up and said this has got to be our book.”

Kevin was a certified life coach who wrote two self-help books: “The Miracle of Optimism: Change Your Perspective, Transform Your Life” in 2007 and “The Agony of Winning: Seven Strategies for Winning Bigger” in 2010. He was also the head coach of Mount Mercy University in Cedar Rapids, Iowa from 1979 to 1985 before the college named him to its hall of fame in 1990.

Before Kevin’s passing, Patrick would assist his brother with Elite Performance workshops for sports teams of all levels across the country. Patrick has continued his brother’s work in the years since and said he is grateful for every opportunity.

“When I go to do a workshop, I get the blessing of feeling his presence right there with me, and it’s such an awesome feeling. I get this gift that I tell these players all the time that I am very thankful that they give me the opportunity to do this. That they trust me enough to do this because you give me the opportunity to be present with my brother. I walk out of there with my heart full.”

With his book, Patrick hopes he can do for others what his brother has done for so many people.

“What I enjoyed most about it is this ability to be able to take some of my own life experiences and use them as a way to teach some of the lessons that were painful experiences for me,” Patrick said. “It was very therapeutic to put that out there. It also challenged my deepest fears of being able to even produce a book. I had a lot of anxiety in the process that I had to overcome. Who am I to write a book, and who’s really going to want it? What I learned is that it’s not about that. If I’m able to help one person relieve that pressure and anxiety by applying some of the things that I teach, it will be worth it.”

Information regarding purchasing platforms can be found at eliteperformancetoo-e.com.