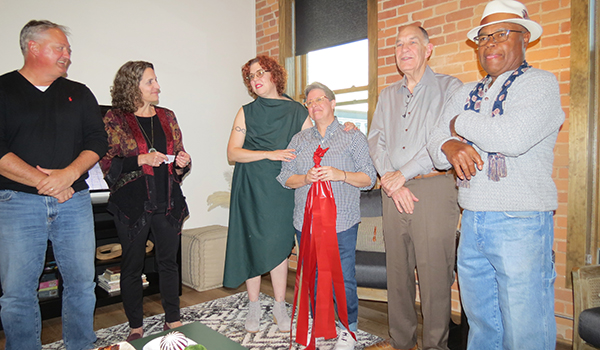 The Greater Dowagiac Chamber of Commerce hosted a Business After Hours event and ribbon-tying ceremony to celebrate the opening of The Altus Apartment, 143 S. Front St., a short-term rental property that joins the Stay Dowagiac family of vacation rental spaces.

The building, vacant for decades prior to being purchased, was purchased by Shannon Lyons and Cathy McBride last February. The two started renovating the property last year, and it saw its first guests in October.

The renovation included clearing about 27 dumpsters full of rubble and fixing a leaking roof, which the previous owner had remedied by putting kiddie pools underneath the leaks – without being emptied for over 20 years.

A slideshow presentation of the renovation – which included the downstairs space Art Enah Suit, owned by O’Larry Collins – played on the apartment’s television throughout the event.

“This was probably the most challenging piece of property in our downtown at the time,” said Mayor Don Lyons, who is also the father of Shannon Lyons.

Shannon Lyons said the process ran into some snags with the pandemic as well as supply chain issues, but seeing the final product made it all worth it.

“We decided we wanted to get into this building once we saw the city had acquired it,” Shannon Lyons said. “We had this vision for it and knew it could be something really special. … I think the fact that we got it done in a year is amazing.

Don Lyons added the luxury downtown short-term rental also is a bit of an experiment for the city, to see if it can sustain the Stay Dowagiac group of vacation rentals, which also includes the 1870 house, 306 W. Division, the Hatch Street Manor, 24105 Hatch St., and beginning in summer of 2022, Wonder Woods, a boutique lakeside campground.

“There’s no competition between us,” said Shannon Lyons, of the vacation rental properties. “If somebody isn’t happy here, and they’d rather stay at the 1870 House or Hatch, then I want them there. We, as a group, can really make a vibrant community for people to visit, and that’s what we’re committed to with this apartment.”

The Altus Apartment was booked every weekend in October and already has a November booking and a Christmas booking. For more information on The Altus Apartment or to book any of the Stay Dowagiac properties, visit staydowagiac.com.

Soenen said instead of a traditional ribbon-cutting, the chamber has been doing ribbon-tying ceremonies over the past year. Participating in the ceremony were McBride, Shannon Lyons, Don Lyons, Soenen, Collins and Matthew Cripe – representing the community.

“This particular ribbon-tying ceremony for me is very symbolic,” Soenen said. “This one business and these business owners [Lyons and McBride], helped to very much tie in this established business owner [Collins], and keep him in the community.

“When Larry’s previous, previous building was unsuitable for him to remain in, these women stepped up and housed Larry’s business.”

Collins’ store was also open to attendees of the event.

Food and beverages at the event were provided by Propaganda Pizza ownership group, Haunt of Hounds. Dessert cupcakes were provided by Shannon Lyons. Lighting for the apartment was done by South Bend’s Kendall Lighting Center.