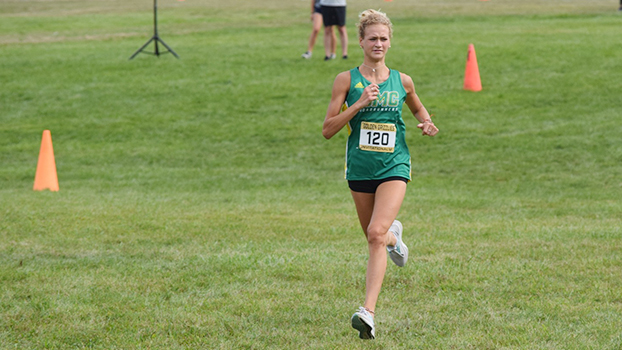 “So many of them haven’t run before or done this kind of intense training,” said Roadrunner Head Coach Zac Sartori. “I still think they’re going to improve. The big thing is keeping them healthy through the next couple of weeks because they’re a little banged up. If they continue to perform the way they’ve been performing, I think we’ve got a solid shot at fourth place in the region.”

“The women are doing exceptionally well from where we started,” Sartori said. “I expected Bailee [Shambaugh, Mishawaka] to be the top runner based on high school. Raegan [Del Guanto, Union home-schooler] had never run competitively but immersed herself during quarantine. She’s been improving week after week. I think, initially, she thought it sounded like fun and a neat experience. Now she’s starting to understand she’s fairly talented at this, and I think she can break 22 this year.

“Vanessa [Crisenbery, Coloma], essentially had a year and off from competing. I recruited Coralynn [Hellenthal], Ava [Hart] and Abby [Lee] on campus. Abby’s struggled a bit this season because she’s got a lot on her plate. She’s an RA [resident assistant in housing], and she’s got night classes, so she’s up later, making early-morning practices harder.”

“[Lee, of Elkhart] is realizing she has the strength she used to have as a runner and is coming into her own,” Sartori said. “She PR-ed [personal record] her season record by a minute per mile. She’s improving a ton. I think by the end of the season, she’ll be close to her all-time PR. She hadn’t trained for three years since high school.”

“Cora hadn’t trained as a distance runner for about three years” since high school in Zeeland. “She converted to distance running as a senior, but traditionally was a sprinter and middle-distance runner,” Sartori said, “though she jogged to stay fit. She’s turned out to be a real solid number four or five runner.”

Of course, the biggest surprise Sartori said, is Hart, who played lacrosse during high school in Illinois.

“I saw her drinking Starbucks at orientation and thought she looked like an athlete,” he said. “She had taken to running around Twin Lakes since her family moved to Michigan. I asked her if she’d ever thought about running cross country. She replied, ‘Not really.’ Would you like to? That’s all it took, and she was sold. The first practice I could see she had talent.”

Hart finished third of 76 runners at the Kirtland Firebird Invitational in Grayling.

“The biggest challenge is to help her discover how hard and fast she can run because, like Raegan, she’s very new to this,” Sartori said. “Ava is still discovering what it means to be a runner, so I’m really looking forward to seeing her at regionals. I think she’s got a big PR coming.

“I had her run with the men for a bit because there’s no one on the women’s side yet who can push her to the level she needs to be. The challenge for next year is to find three or four more young women like Ava who can push at that pace. Cora, Vanessa and Abby will graduate, so right now, that’s where I’m focusing my recruiting efforts. I think that’s where our biggest opportunity for success is.”

Among his prospects is a runner whose parents ran for former SMC Coach Ron Gunn in the 1980s.

“I’m hoping to get some more experienced runners that I can challenge more,” Sartori said. “Ava’s been fun to work with, but I have to temper everything I do with her. She’s new. I can’t push her too hard because I don’t want to push her away, I want to keep this fun and exciting.”

“We are improving by significant amounts every week,” Sartori said. “Bailee, who was the only one with recent experience, has been a rock. She’s goofy and sassy, but knows what needs to get done, does the work and helps the younger athletes know why we’re doing what we’re doing. She also encourages the returning athletes who hadn’t trained in a while. Vanessa, too, she’s kind of the team mom. At some point, she’s taken everyone under her wing and guided our runners. We would be a lot less confident without those two.”