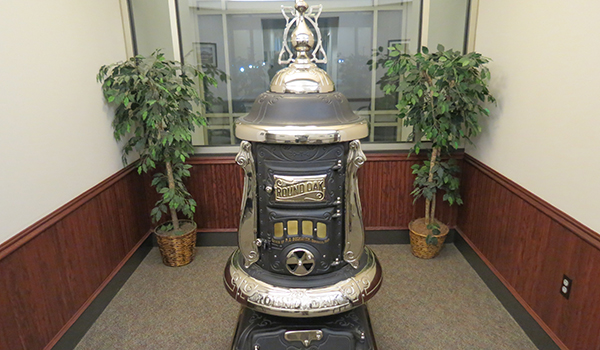 Monday, the Dowagiac City Council recognized the sesquicentennial of Round Oak Stove Company for bringing the industrial revolution to the city, as well as the many other influences Philo D. Beckwith and the company had on the area.

Beckwith settled in Dowagiac in 1854 Round Oak Stove Company was founded by Beckwith in 1871 after attempts to heat his struggling foundry inspired him to experiment with heating stoves, according to the Dowagiac Area History Museum.

“Round Oak accelerated the growth of Dowagiac with increasing numbers of employees, thus becoming the city of Dowagiac,” said Mayor Don Lyons. “The impact of Beckwith and Round Oak went beyond the factory with philanthropic activities, including the establishment of the city’s first library and the building of a first-class theater.”

Around 1900, Round Oak introduced the fictional Chief Doh-Wah-Jack, which helped townspeople pronounce the name of the then-village. Chief Do-Wah-Jack can be seen on many stoves and furnaces produced by the company. In the early 1910s, the company had over 1,200 employees at a time when the city’s population was just over 5,000.

While the company has been out of business for 75 years, and traces of the Beckwith family are long gone, the Beckwith name, as well as Round Oak stoves, can still be seen all over Dowagiac. From Beckwith Park to Beckwith Theatre and Beckwith Street, the legacy of Round Oak will not soon be forgotten by the city.

The council also approved a resolution authorizing a pilot “smart meter” program with Vision Metering, which will allow the city to measure electric and water meters remotely instead of in the field, as well as detect outages and daily usage information.

“What smart metering really does is give us the opportunity now to do multiple things with meters,” said City Manager Kevin Anderson. “It actually costs less than the regular meters that we’ve got to replace them. … It will also allow us to turn customers on when they come in immediately, when they’re at the counter or when they’re registered. It will also let us, when we’re doing collection, to shut things off without having to send linemen to and from properties.”

Residents will also have access to readings, which are updated every 15 minutes. If the product works to the council’s expectations, purchase orders for new meters will begin during

the first quarter of 2022, according to Anderson.

“The other thing that becomes a really strong benefit for us as an operation is that it also can tell you whwn a meter’s running and the meter’s not running,” Anderson said. “So like over a couple of weeks ago, we had a very intense windstorm.

We will be able to go out and instantly see where all the meters are that are off.”