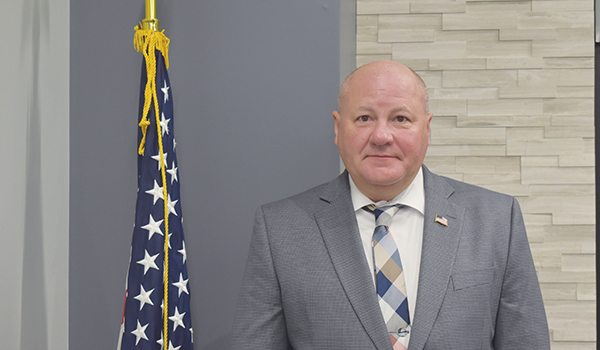 Since LaValle’s departure, the village has been seeking a new police chief. McMichael was chosen following interviews with the village president and manager, along with a board interview featuring regional police chiefs and the Berrien County Sheriff’s Office.

“Since July, we have been going through a lengthy interview process,” said Village Manager Emilie LaGrow. “This is an important role for our village, and it was important to make sure we were cautious and thorough in our search.”

Following his swearing-in, McMichael said he felt good and was honored to serve the people of Cassopolis.

Born and raised in Cassopolis, McMichael has 31 years’ law enforcement experience, many of which were spent as a road patrol officer with the Cass County Sheriff’s Office. He said he was inspired to enter enforcement after growing up surrounded by many police officers in his family and community.

McMichael retired from the sheriff’s office in 2018 before starting part-time with the village.

“I started working [at the Cassopolis Police Department] because I needed something to do,” he said. “When the chief position became available, I applied, and the rest is history.”

Now that he has officially begun his duties as police chief, McMichael said his top priorities are to provide his officers with training and establish a strong relationship between law enforcement and the community.

“This is a great town already,” McMichael said. “There are not a lot of changes that need to be made, I think, but the town is changing. They are bringing in more businesses, and I’m really looking forward to working with [Village Manager LaGrow] and working with the village as those changes are made.”

LaGrow said she believes McMichael will do well in his new position.

“He is an excellent candidate,” she said. “He has experience in many areas, and he is a great asset here in the village.”