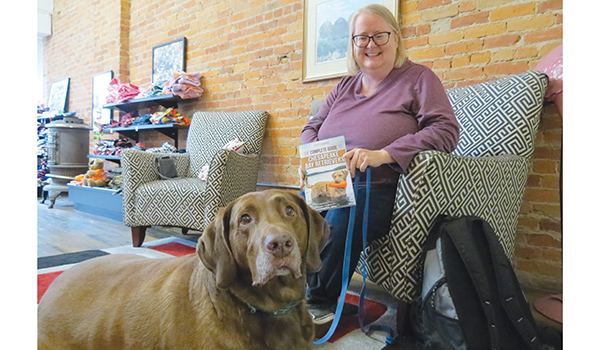 DOWAGIAC – Thanks in part to her dog, a local freelance writer finally has her name as the sole author on the cover of a book.

Dowagiac graduate and current Edwardsburg resident Karen Harris, a freelance writer who typically ghostwrites nonfiction books and articles for clients, is the named author of her first solo book “The Complete Guide to Chesapeake Bay Retrievers.”

Harris, who has her master’s degree in English from Indiana University South Bend, has worked with this publisher client, LP Media, on several breed-specific dog books in the past.  However, she generally does not see her name printed on the book – such is the no-glory life of a ghostwriter – which Harris said she prefers.

But this book but was different, thanks to Harris’ history of owning Chesapeake Bay retrievers, which are called ‘Chessies’ for short.

“When it came to the Chessie, I was like ‘I have a Chessie, and I had one of the past, and I know about this dog,’” said Harris, of her talks with the client. “The client said, ‘oh great, because we’d like personal stories in there to beef up the information.’”

Stories of Hank, a nine-year-old Chessie, are peppered throughout the book, including a tale of him pulling a knife on Harris and other various canine exploits. Even after including her personal experiences with Hank, though, Harris was surprised when the client sent her the published book – with her name on the cover.

“I was like, ‘well, you don’t understand what ghostwriting means,’” Harris said, who also has worked as an English instructor at IUSB and Southwestern Michigan College. “And he’s like, ‘these are your stories from the dog, so we put your name on it.’ So, that was kind of a pleasant surprise.”

While Harris’ love of Chessies did not necessarily inspire the book, she said her family has loved their experience with the breed.

“The first one we had, Maizie, my husband did a lot of research on what dogs would be good with families. We liked bigger dogs better than the little ones, so we read up on the Chessies,” Harris said. “So once Maizie crossed the rainbow bridge, we got Hank.”

Chessies get their name from an 1807 shipwreck on the Chesapeake Bay, during which two puppies were rescued from a sinking ship. The two puppies became known as the parents of the Chessie breed and were bred with other dogs, such as hounds and spaniels, to bring out the duck-hunting traits valued by the people living on the bay.

Because of this, Chessies are more well-known in the Northeastern U.S. as duck hunters and great swimmers, due to their natural oils and thick, wavy fur. Local ducks need not fret, Hank has evolved out of his puppy stage, and is happy just to chase squirrels on the deck and bark at the Amazon delivery driver, Harris said..

“Squirrels are the bane of his existence,” Harris said. “We never trained him to do any of the hunting, but when we go out in the woods, he loves to run around out there. He does love to swim as well.”

One of the most common comments Harris gets about Hank is how similar he looks to a Chocolate Lab, but in her book, she writes that the two breeds are genetically not related, though they are both in the retriever family. Chessies are also more barrel-chested, as well as being the introverts of the retriever world, according to the book.

“It doesn’t mean that Hank lacks in personality,” Harris said. “He and [Maizie] are super friendly, good with the kids and good with other dogs. They’re really big, but they’re teddy bears.”

Harris said she likes to take Hank into the Bow Wow Bakery and Bath, 145 S Front St., Dowagiac, to get his nails clipped.

“It takes like literally takes a small army and a chainsaw. His toenails are awful,” Harris said. “So, it’s well worth the 12 bucks I pay them here.”

For Harris, whose name has appeared as co-author and contributor on many projects, recognition is not why she is in the business, in fact, she said she does not like attention. Hank, according to her, is the one who deserves it.

“I’ve probably written close to 20 books, but my name is never on them cause it’s a ghostwriting position,” she said. “Clients hire you if they like you, and if you do the work, they pay you. It’s a beautiful thing, and I can work from home with my dog at my feet.”

Hank will be on hand – or paw – for a book signing at Bow Wow from 10 a.m. to noon Saturday, Nov. 13 during the Greater Dowagiac Chamber of Commerce Christmas Open House Weekend. Roughly 10 copies of the book will be available for purchase at the book signing.

“Hank would like me to donate the money from the sales of the book to the Cass County Animal Shelter,” Harris said.