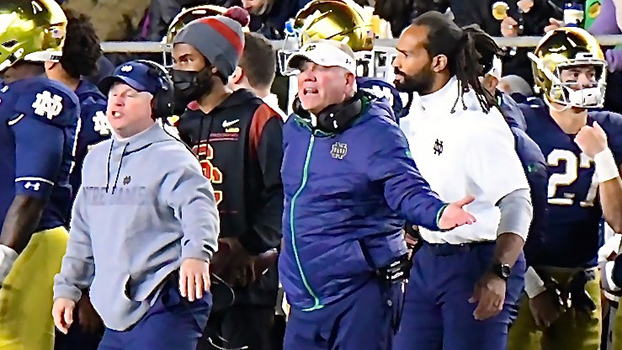 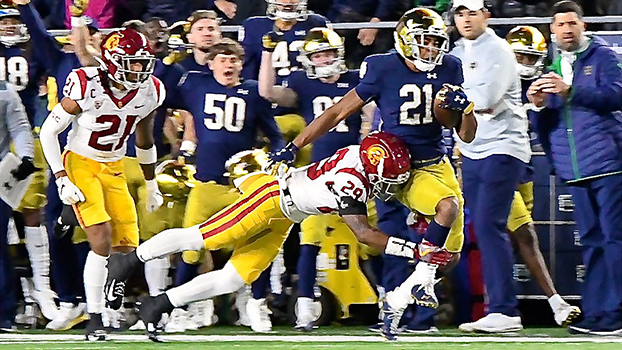 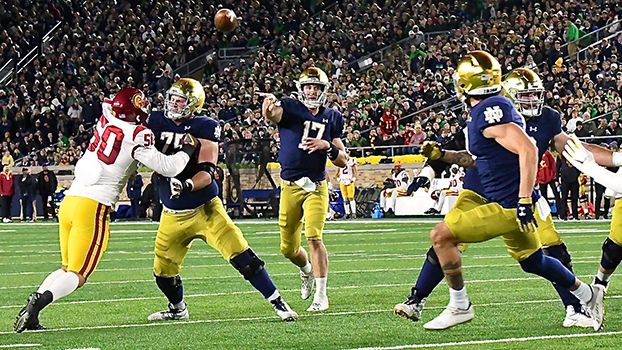 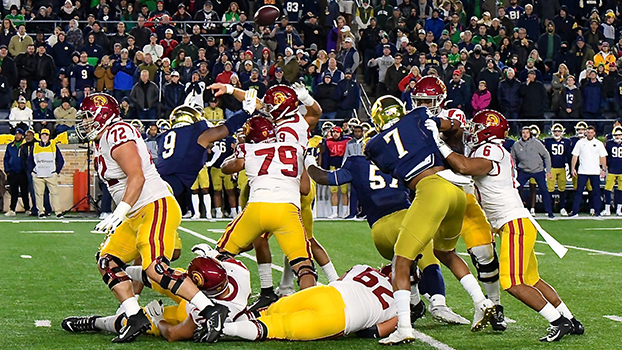 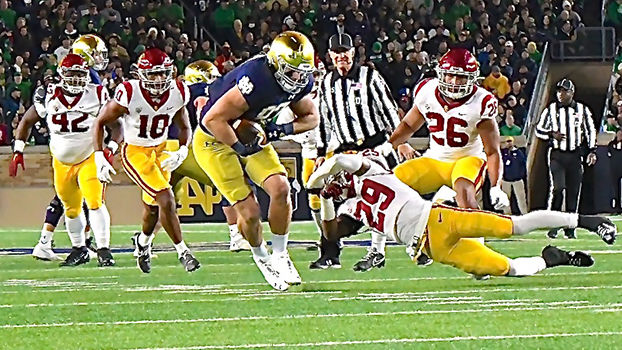 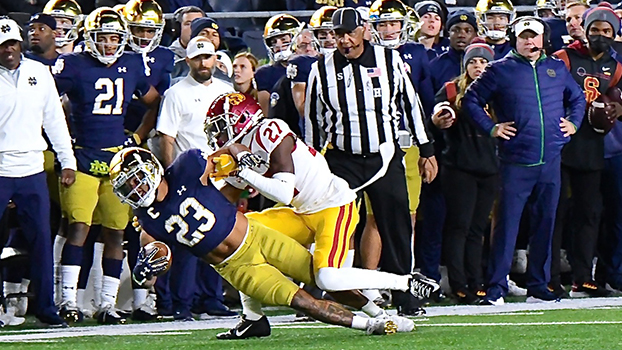 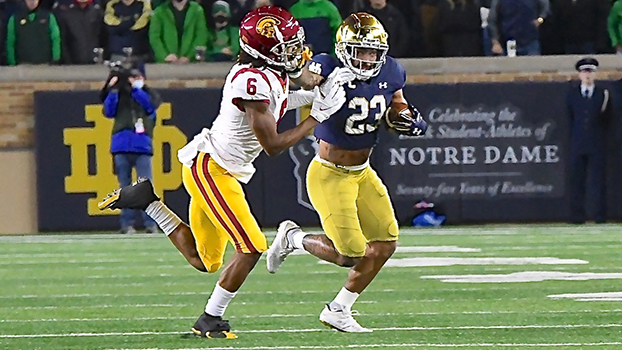 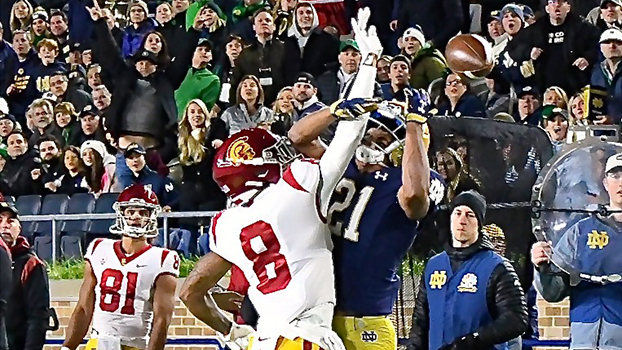 SOUTH BEND — Notre Dame head coach Brian Kelly was ready and waiting to see the Fighting Irish offense take its next step heading into its annual rivalry game against the University of Southern California.

“We needed to see our offense mature, which I thought tonight was probably that first step where we felt from the start of the game to the end of the game, the offense began to come together in the manner that we wanted it to,” Kelly said. “We played faster. We put Jack [Coan] in a position where the ball came out quick. We gave him quick, definitive run/pass reads, and it really seemed to give us the kind of offensive flow that we’re looking for.”

Trailing 24-3 entering the fourth quarter, the Trojans scored their first touchdown when running back Keaontay Ingram scored on a 3-yard run to cap a 9-play, 77-yard drive to make the game 24-10. After USC’s Chris Steele intercepted Coan on the Trojan 14-yard line, USC began an 8-play, 86-yard scoring drive with a 3-yard touchdown run from Darwin Baldwin to trim Notre Dame’s lead to 24-16.

The Irish were able to respond on offense with some help from the USC defense. Unsportsmanlike conduct and pass interference penalties extended what was an 8-play, 75-yard drive that resulted in a 3-yard Tyler Buchner touchdown run to give Notre Dame a 31-16 lead and effectively put the game out of reach.

Coan completed 20-of-28 passes for 189 yards, one touchdown and one interception and Tyler Buchner was 2-of-2 for 24 yards and carried three times for 11 yards and a touchdown run.

The Irish ran a more up-tempo offense to catch the defense off guard and get Coan, who typically operates under center, into a rhythm.

“He’s not afraid to put the ball in tight windows,” Kelly said. “He can see the field very well.  What we needed to do, as coaches, we needed to put him in a position that makes him feel the most comfortable. “It’s better that he doesn’t have a structured offense that slows him down.  You know, we need to put him in the shotgun. I know that sounds crazy because he kind of grew up with, you know, a much more direct snap play action, but it’s not the best version. At least that’s what we thought.”

When the team self-scouted itself during the bye week, Kelly and his staff spent most of their time putting the offense together with Coan in an up-tempo offensive structure and then fit in Buchner where they felt like they would get matchups with defensive personnel.

“We think it’s extremely sustainable based upon the body of work through four quarters,” Kelly said. “I think if we’re sputtering again and maybe we look at it and go, okay, this is just going to be trying to put this thing together. But we felt pretty good after today.”

Lorenzo Styles led the team in receiving yards with 57 on three catches and Michael Mayer had five for 54. Avery Davis caught two passes for 10 yards, including a 4-yard touchdown reception to give the Irish an early 7-0 lead.

Kedon Slovis completed 27-of-37 passes for 299 yards and one interception and Ingram had 24 carries for 138 yards and one touchdown. Dynamic receiver Drake London tallied 15 catches for 171 yards, but did not reach the end zone.

“We didn’t fall for a double-move, which we did late in the third quarter, which was crazy,” Kelly said. “He had 13 receptions before the double-move. He hadn’t impacted the game. Because we kept him in front of us. So it was to not to fall for double-moves and not give up any big plays. Unfortunately, later in the game, we gave up a couple big plays.”

While there were bumps along the way, Kelly was happy his team could deliver a rivalry win to the Irish faithful.

The Fighting Irish will look to keep the momentum going when they host North Carolina at 7:30 p.m. Saturday.