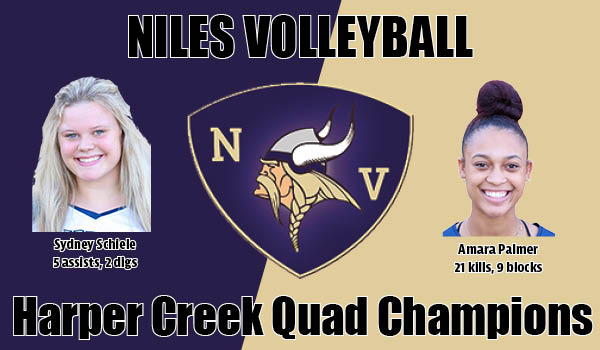 “We knew we needed to make sure that we faced some tough teams today on our final day of our regular season matches in order to finish strong and prepare for districts,” said Niles Coach Jenny Nate. “This sweep was huge for us as we move into preparation for post-season play. We haven’t beat Portage Central since 2015 when we won the SMAC Conference Championship, so that was a big win.”

The Vikings got to work on some things that may pay dividends down the road, according to Nate.

“We were forced today to put up a big block against some strong hitters, communicate defensively and focus on reading the hitters, and all of our hitters knew they would have to be on,” she said. “The key to our success is being able to utilize our entire team — especially our six hitters in our offense. The setters really had to move it around so that we stayed the aggressors controlling the tempo in all three matches. We were able to come away with a quad championship, but we also gained some valuable insight into some defensive and offensive goals we need to work on moving forward to make sure we play at our highest level in our first round of districts.”

Niles will spend the coming week practicing and participating in scrimmages to prepare for its Division 2 District opener at Dowagiac against the winner of the Coloma-Benton Harbor match Nov. 3. The Vikings received a first-round bye and will face the Comets or the Tigers in the semifinals at 5 p.m.

In the other half of the bracket, defending district champion Edwardsburg will face the winner of the Berrien Springs-Dowagiac match at 7 p.m. Nov. 3. The first round at Dowagiac Union High School is Monday, Nov. 1. Matches will be played at 5 and 7 p.m. The championship match is scheduled for 6 p.m. Thursday, Nov. 4.