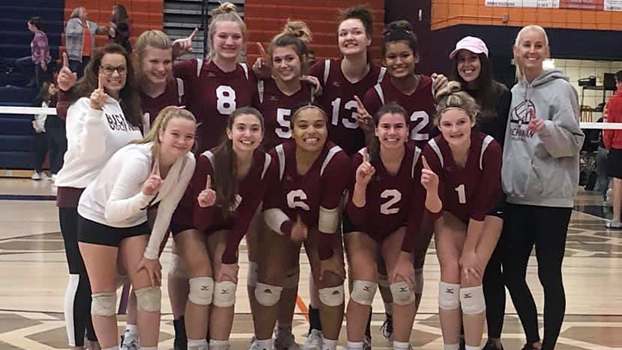 “I told the girls before we started playing Saturday that we had to play very consistent all day long to win the conference title,” said Buchanan Coach Shelly Bossert. “We did just that. We played well all day and everyone played their role. I’m also very proud of them for being great teammates all day long.”

The Bucks dominated the net all day long. Josie West led Buchanan with 19 kills, while Faith Carson and Alexa Burns both finished with 15 kills and Alyssa Carson 13 kills. Chloe Aalfs finished with 13 kills.

Buchanan also had Faith Carson with 13 blocks, West with eight blocks and Burns with seven.

The Bucks (30-6) were equally up to the challenge defensively. Buchanan had libero Hailey Jonatzke with 30 digs, West with 20, Alyvia Hickok with 19, Lauren Strefling with 17 and Alea Fisher with 15.

At the service line, Hickok, who also led the team with 77 assists, finished with six aces, while Fisher and West added five aces each.

The Bucks will wrap up the regular season Tuesday at the Saugatuck Tri before setting their sights on the Division 3 District Tournament, which will also be held at Bridgman.

“This weekend was important because it gives us momentum moving ahead,” Bossert said. “I am very excited for postseason. This is a great group of girls. All of them are very special to this team.”

Brandywine went 3-1 on the day. The Bobcats defeated South Haven (2-0), lost to Buchanan, defeated Bridgman (2-1) and defeated Berrien Springs (2-0). The win over the host Bees avenged a loss to Bridgman last Wednesday night in the final regular-season league match.

Kadence Brumitt led the Bobcats with 43 kills and five blocks, while Clara DePriest had 11 kills and four blocks. Haley Scott finished the day with 10 kills, four blocks and six aces.

Defensively for the Bobcats, Olivia Laurita had 37 digs to go along with three aces. Brumitt finished with 29 digs and five aces, while Ellie Knapp had 27 digs. Elizabeth Stockdale added 21 digs and five aces. Hope Typer contributed 15 digs and six aces.

The Bobcats (27-15-4) wrap up their regular season Wednesday by hosting Michigan Lutheran. Brandywine will then get ready to begin its postseason run at the Bridgman Division 3 District Tournament.