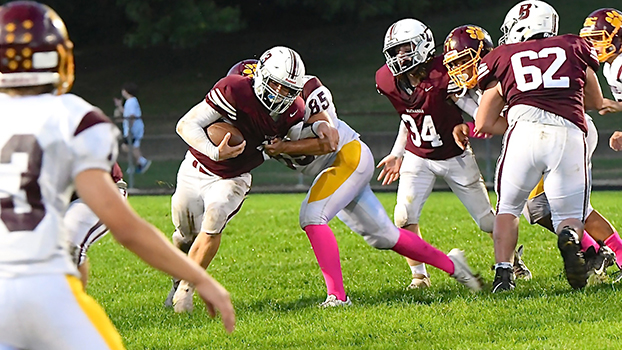 CENTREVILLE — A season with higher expectations than results came to an end for the Buchanan Bucks Friday night.

Buchanan (3-6) ended its 2021 campaign with a 53-13 loss to defending Division 8 state champion Centreville.

After a close first quarter, which had the Bulldogs taking an 8-0, Centreville exploded for 24 points in the second quarter to open up a 32-0 halftime lead on the Bucks.

Buchanan would score both of its touchdowns in the final 24 minutes of play.

Connor LeGault threw a pair of touchdowns passes, one in the third and one in the fourth quarter. The first pass went to Brady Thompson, which covered 27 yards. Logan Grwinski added the extra points kick to cut the Centreville lead to 32-7.

The second LeGault touchdown pass went to Drew Glavin, which was good for 21 yards. The 2-point conversion pass was incomplete.

Buchanan finished the night with just 181 yards in total offense compared to 458 yards by Centreville. The Bulldogs threw for 262 yards and ran for 196 yards.

LeGault finished the night 10-of-24 for 126 yards with two touchdowns and two interceptions. Nico Finn led the ground game with 35 yards on eight carries. Thompson led the receivers with two receptions for 39 yards and a touchdown.

Troy Holloway led the Bucks with five and a half tackles, while Thomas VanOverBerghe had five tackles. Thompson and Jaxon Seddon both had interceptions for Buchanan.

Centreville quarterback Tyler Swanwick was 13-of-23 for 262 yards with two touchdowns and two interceptions. Mason Lemings was the top receiver as he finished the game with 136 yards on seven receptions and both Bulldogs touchdowns.

Gavin Bunning ran for 100 yards on 11 carries and had a touchdown.