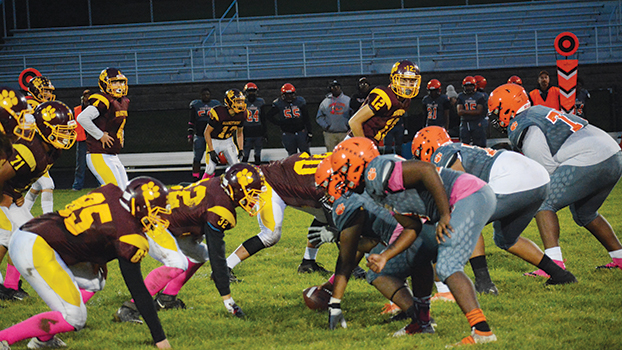 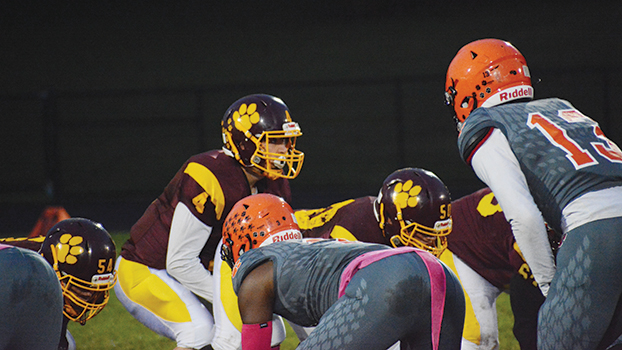 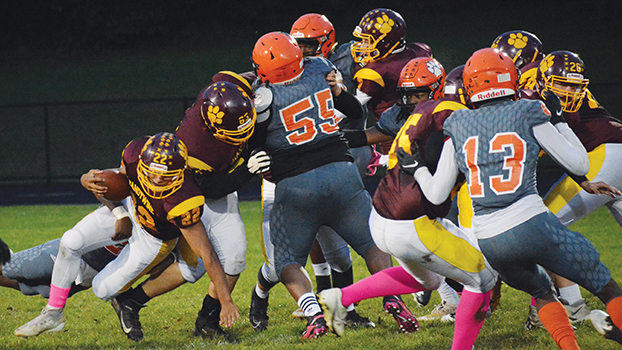 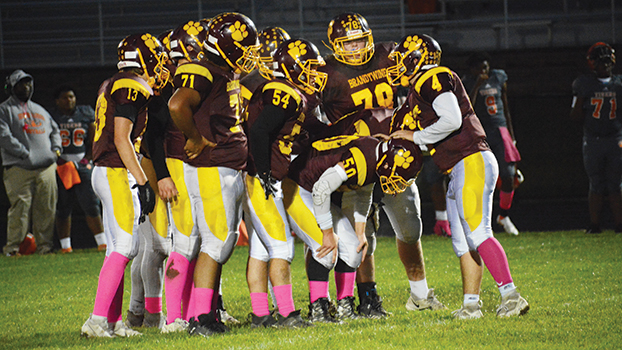 NILES — It was a tale of two halves for the Brandywine football team Friday night.

After racing out to a 30-0 halftime lead over visiting Benton Harbor, the Bobcats held off a Benton Harbor comeback bid to earn a 44-32 Senior Night victory.

The win gives the Bobcats a 4-5 record and a chance to qualify for the playoffs for the fourth year in a row. The Tigers end the season with a 2-7 record.

“[Benton Harbor] didn’t quit,” said Brandywine coach Mike Nate. “They came back like gangbusters with a lot of big plays. I’ll be honest with you, I was sweating it out.”

Holding a 30-24 lead over Benton Harbor and facing a 4th-and-6 from the Tigers 31-yard line with 7:13 left in the game, Brandywine senior quarterback Blake Krueger rolled to his left and found Chase Valade for a 31-yard touchdown pass to put the Bobcats up 36-24.

Six seconds later, Gavin Schoff recovered a Benton Harbor fumble and picked it up for a 10-yard scoop and score to give Brandywine a 44-24 lead.

The Tigers refused to go quietly as Tasker found Sargent for another touchdown pass — this one good for 87 yards — to make it 44-32 with 6:40 to go. But key first down runs from McCullough and Krueger were enough to ice the game for the Bobcats.

“We had to win to try to make it to the playoffs, right,” Nate said. “They had all the momentum, and we had a couple scores there in the fourth quarter that helped us tremendously.”

When nothing seemed to be going right for the Bobcats, Krueger said the team was able to weather the storm because of its mental toughness and the encouragement of the coaching staff.

“It’s very easy to get discouraged,” Krueger said. “The coaches do a good job of keeping us up and getting on us, so we were able to make enough plays at the end to get the win.”

Krueger, a senior, battled through a leg injury to complete 1-of-3 passes for 31 yards and one touchdown and added 53 yards on 11 carries and a touchdown run. Senior Ivory McCullough, who did not play last week due to injury, tallied a career-high 36 carries for 150 yards and three touchdown runs and fellow senior Valade had one catch for a 31-yard touchdown pass.

“[McCullough] has to be close to 1,000 rushing yards this year,” Nate said. “He didn’t play last week against Berrien Springs. His knee was the size of a basketball. We sat him out last week and he had the big game tonight.”

“The run game was there,” Krueger said. “We played man football and were running it down their throats in the first half.”

Benton Harbor’s big-play ability was on full display in the second half. The Tigers shut down Brandywine’s run game and scored 24 unanswered points on plays of 65, 60, 76 and 71 yards to trim Brandywine’s lead to 30-24 with 10:43 remaining in the game.

According to Brandywine coach Mike Nate, the team’s energy was not where it needed to be at halftime.

“I’ve been around here for a while, so I know it’s never over until it’s over,” Nate said. “That’s what I had to explain to them at halftime when the celebration started early. They were talking about how they’re going to watch the selection show, well, the game’s not over yet. I didn’t want to hear that crap.”

The Bobcats were outgained 337-327 in total yards despite having a 68-30 edge in plays. Benton Harbor was whistled for 10 penalties for 96 yards and Brandywine three for 32.

With a win in hand, the Bobcats hope their playoff wishes are granted. Entering Friday’s game, Brandywine ranked 27th in playoff points for Division 7, with the top 32 teams qualifying for postseason play.

Brandywine will learn its fate when the Michigan High School Athletic Association Football Playoffs are announced at 5:30 p.m. Sunday on the Bally Sports Detroit primary channel.

“This team has done a great job against a tough schedule,” Nate said. “It would be a great accomplishment. We’re not going to celebrate until we see our name. We don’t care who we play.”

Krueger would love nothing more than to spend one more week together with his team.

“I love these guys,” he said. “We’ve been working and playing hard all year and that means everything to me. It’s all love for everyone who plays on this team.”