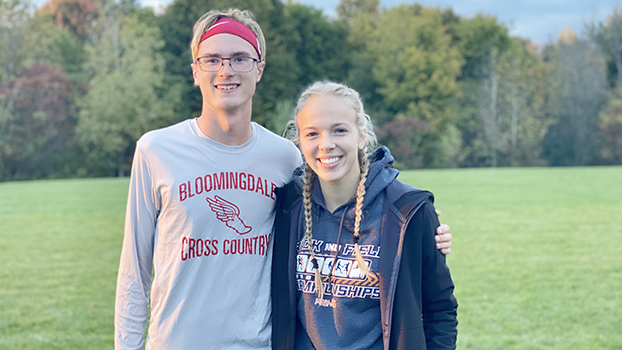 Tyler Osterman, of Bloomingdale, and Lauren Anderson, of Cassopolis, were the winners of the Bill Swanwick Courageous Runner Award. (Submitted photo)

CASSOPOLIS — Senior Lauren Anderson not only earned All-Southwest 10 Conference cross country honors, but she was the winner of the Bill Swanwick Courageous Runner Award, it was announced Wednesday.

The Southwest 10 released its boys and girls all-conference teams Wednesday, with the Rangers landing one runner on each squad.

Anderson was a first-team honoree, as was Marcellus’ Addie Curtis. The Wildcats had Merle Muntefering and Clare Flory earn second-team all-conference.

Hartford was the girls cross country champion as they finished with 29 points. Centreville was second with 26 points, while Marcellus finished fifth with 19 points. Decatur was eighth with nine points, while Cassopolis, which did not have enough runners to field a full team, finished with three points.

Bloomingdale was the boys cross country champion with 30 points. Centreville was second with 25, Decatur fifth with 18 points and Cassopolis eighth with seven points. Marcellus was 10th with five points.

The Cardinals’ Tyler Osterman was the winner of the Bill Swanwick Courageous Runner Award.

Dart Avery and Andrew Confer were first-team all-conference members for the Raiders. Cassopolis’ Jaren Waldschmidt was a second-team member.