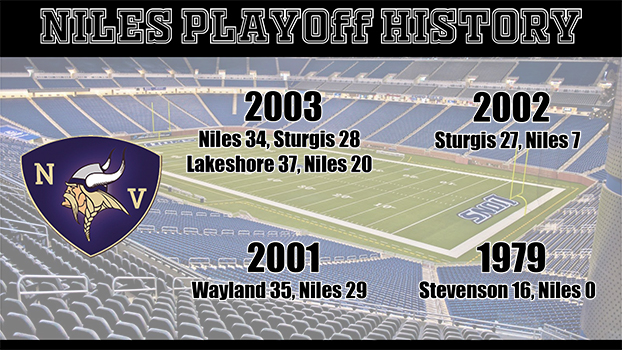 DOWAGIAC — When Dowagiac and Niles renewed their football rivalry last year after 13 years, it was not a typical game due to the restriction on numbers of fans due to COVID-19.

The game was played in less than ideal conditions, with the Chieftains defeating the Vikings 20-0.

Dowagiac and Niles will square off once again, this time at Chris Taylor-Alumni Field Friday night, but both teams will have a different agenda.

Niles (4-4, 3-4 Wolverine) enters the game needed a win to keep its postseason hopes alive. The Vikings, who are now coached by former Three Rivers Coach Scot Shaw, began their playoff run last week against Otsego, a game it won 36-20, according to the Hall of Fame coach.

The Chieftains (0-8, 0-7 Wolverine) enter the game winless for the first time in school history. Dowagiac, under first-year Coach Duane Davis, will be looking to spoil the Niles march to the playoffs and end the season on a high note with a victory.

This would not be the first time one of these two teams has spoiled the season for the other. The most notable game was in 1989 when the Vikings defeated an 8-0 Chieftain squad 13-9 in the regular-season finale. Dowagiac would lose to Shaw and the Wildcats in the opening round of the playoffs 13-7.

The Chieftains will not only be trying to knock Niles out of the playoffs, but spoil their chances of having its first winning season since 2014 and only its fifth winning season in the past 35 years.

Both teams are aware that this is a rivalry game, but probably do not understand its significance since last year was the first game in more than a decade.

“We have mentioned that it’s a rivalry game, but hardly any kids at either school know why,” Shaw said. “We have told them that we would like to bring the plaque back. In reality, we have talked more about finishing well and playoffs, winning record, etc.”

Dowagiac will be looking to hold on to the “Black and Blue” plaque.

“This game has been circled on the calendar since day one, and we have stressed the importance all week to the kids about the plaque staying home,” Davis said.

Both teams have struggled at times putting points on the board. The Chieftains have scored 14 points all season, while the Vikings started slowly, but have picked up steam the past few weeks. Niles has scored 24 or more points in its four wins — Sturgis, Buchanan, Three Rivers, Otsego — but averages just 10.2 points per game in its losses.

Davis said the Chieftains need to complete drives if they are going to be successful Friday night.

“Offensively, we just have to be consistent and do our jobs every play,” he said.

Shaw will be trying to keep his team focused on Dowagiac and not look at things like their record.

“We are not all that removed from the same thing,” he said. “We have talked about playing our best and not letting noise — good or bad — get in the way.”

The Vikings are at their best running the football. The passing game has improved with sophomore quarterback Talon Brawley, but Niles will look to Julian Means-Flewellen, also a sophomore, and freshman Sam Rucker and Brawley to keep the clock running with ball control.

Davis said stopping the run will be the key for the Chieftains on defense.

“Defensively, it will be tough to stop their downhill run game and be ready for the Wing-T buck sweep, but I have confidence in the kids this week that they have gone over the game plans and are ready to play,” he said.

Shaw knows Dowagiac’s rich history, having faced the Chieftains on numerous occasions, both in the Wolverine Conference and the postseason, but this is his first taste of the “Black and Blue” rivalry.

“Again, we have talked about getting the plaque,” he said, “doing our part for success. It falls right in line with our theme for the entire year. I think as the rivalry grows again over the next few years, it will take on greater significance with both schools. Rivalries are great for communities.”

The Bobcats are still clinging to playoff hopes, but must beat Benton Harbor in order to remain in the hunt.

Brandywine (3-5) is looking to bounce back from its 26-6 loss to Berrien Springs last Friday night. The Tigers, winners of two of their last three, dropped a 26-22 decision to Buchanan in the closing seconds last week.

Kickoff is set for 7 p.m. at Selge Field.

The Rangers (5-3) are also hoping to lock up a playoff spot with a win Friday night.

Cassopolis had last week off after receiving a forfeit from Lakeview. The Rangers used the week to heal some nagging injuries and to prepare for the Shamrocks, who are 8-0 on the season.

Kickoff at William F. Scott Field is set for 7 p.m.

The Bucks (3-5) are looking to end the season on a high note, but it will be a tough order for Buchanan as it faces the defending Division 8 state champion Bulldogs.

The Eddies (9-0, 8-0 Wolverine) have already locked up a share of the Wolverine Conference championship, but would like to have the title outright.

Edwardsburg is seeing its fourth consecutive undefeated regular season. The Eddies will be facing a Sturgis squad that has won three of its last four games, but has an overall record of 3-5.

Edwardsburg has given up just 21 points this season and has five shutouts.