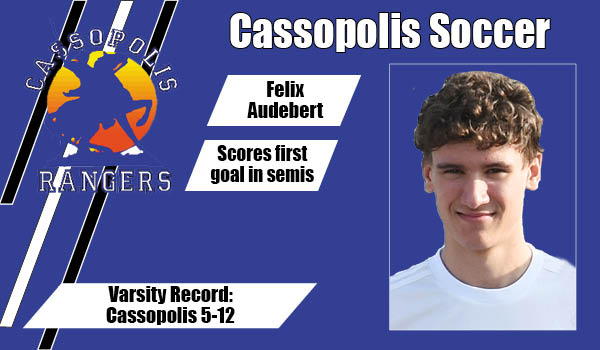 LAWTON — A pair of goals in each half helped the Cassopolis soccer team defeat Kalamazoo Heritage in the Division 4 District semifinals at Lawton High School Wednesday night.

The Rangers (5-12) advance to the district championship match at 11 a.m. Saturday at Lawton against Schoolcraft. The Eagles (10-9) defeated the host Blue Devils 3-1 to move into the finals.

“It was great to get the win, but I don’t feel like we played to our full potential,” said Cassopolis Coach Austin Francis. “We played tough and physical, but not as smart and intelligent as I would like to see.”

Felix Audebert put Cassopolis on the board first in the 11th minute off an assist from Hugo Backing. The Rangers made it 2-0 in the 21st minute as Logan Pflug scored on an unassisted goal.

Kalamazoo Heritage cut the Rangers’ lead to 2-1 24 minutes into the second half on a goal by Ethan Davis.

Cassopolis responded quickly, as R.J. Drews gave the Rangers back their two-goal advantage with an unassisted score a minute later.

The Rangers capped the scoring in the 79th minute on a goal by Jaren Waldschmidt.