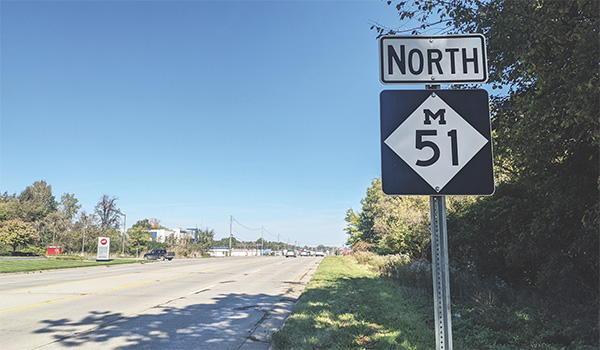 NILES CHARTER TOWNSHIP — A proposed sidewalk project could make walking to and from Niles Charter Township safer and easier for community members.

Representatives from the Michigan Department of Transportation were on hand for Monday’s board of trustees meeting for preliminary discussions regarding their proposal to create a continuous sidewalk on the east side of M-51 from Fort Street south to Bell Road.

The sidewalk project is part of a $26 million reconstruction of the US-12/M-51 interchange and the US-12/Third Street intersection in Niles Township, where indirect left turns, or “Michigan lefts,” will replace the current US-12 intersections with Third Street and M-51. MDOT said that crossings will be placed at both the US-12/M-51 and M-51/Bell Road intersections, connecting the township east of M-51 to the Indiana-Michigan River Valley Trail, a 17-mile trail connecting Niles to Mishawaka.

Construction is expected to start in 2023. MDOT will remove existing bridges, reconstruct one mile of US-12and resurface two-and-a-half miles of M-51.

The proposal was met with a positive response by the board, as the highway receives consistent road traffic despite not having a sidewalk.

“Aside from the snow, I don’t think you’re going to get any objection from the township,” said Niles Township Treasurer Jim Ringler. “The sheer use of it and how many people would use it would offset any major maintenance cost for the first 10 years.”

“I’ve lived out here most of my life,” said Township Clerk Terry Eull. “There’s been a path worn on the east side of the road for years from people walking up and down. I think it’d be a great thing and as long as we don’t have to keep the snow off. We don’t have the equipment, and we don’t take care of any other sidewalk snow removal. It will get used a lot, and so it’d be a safety factor, as well.”

The board plans to make a decision at its next meeting Monday, Nov. 1.

In other business, Lieutenant Sean Soulard of the Berrien County Sheriff’s Department — the township’s new lieutenant — gave his report on police activity for the month of September.

According to Soulard, the township received 450 complaints last month, more than four times as many as the next closest township. Police issued 16 tickets and 29 arrests compared to 229 total tickets and 154 arrests for Berrien County.