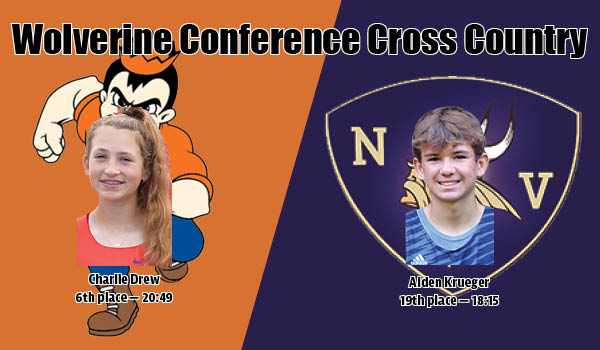 VICKSBURG — Two runners from Niles, and a runner from Edwardsburg, finished in the top 20 to earn All-Wolverine Conference cross country honors Tuesday.

The league held its final meet of the season with Otsego continuing its dominance of both the boys and girls divisions. The Bulldogs swept the team championships, with the boys team scoring 18 points to easily outdistance runner-up and meet host Vicksburg, which finished with 70 points.

The Otsego girls finished with 27 points, while Plainwell was second with 66 points.

Edwardsburg finished fifth in the girl’s race, with Niles finishing seventh. Dowagiac did not field a team.

The Eddies were eighth in the boy’s race, with the Vikings finishing ninth. Dowagiac did not have enough runners to post a team score.

Edwardsburg’s Charlie Drew earned all-conference honors in the girl’s race with a sixth-place finish and a time of 20:49. Niles’ Kierstyn Thompson placed 18th to also earn all-conference. She posted a time of 21:54.

The Vikings’ Aiden Krueger was 19th overall to earn all-conference honors with his time of 18:15.

Buchanan was the runner-up on the girl’s side, which was won by Bridgman with 38 points. The Bucks finished with 63 points. Brandywine finished fourth with 119 points.

The Rangers did not have enough runners to post a team score.

James Burke, of Berrien Springs, won the boy’s championship with a time of 17:00.

Berrien Springs took home the team title with 25 points. The Bobcats finished eighth with 165 points. Buchanan did not have enough runners to post a team score.