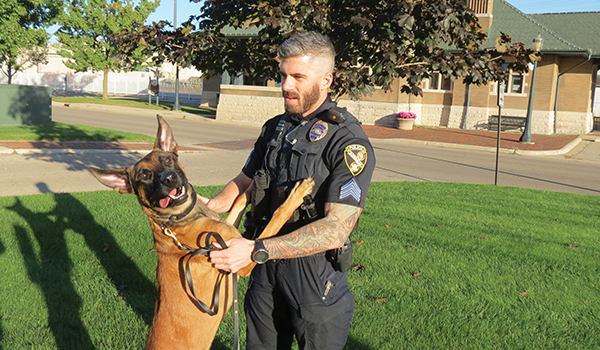 DOWAGIAC – The newest police dog in Dowagiac is ready to “ruff” up some criminals.

When it came to selecting Cash, the department was looking for a number of traits to be the right fit for the role of K-9 officer.

“The genetic makeup of the dog is really what we’re looking for,” Roman said of what makes a particular dog the right fit for the K-9 job. “Also that they’ve got to have a good hunting drive, be ambitious and motivated to work.”

However, it is not just bloodlines that make a good K-9.

“There are some dogs that may come from a police or military bloodline, but they’re suited to be a military dog or a home dog,” Roman said. “Intangibles, that’s what we’re looking for — things you can’t train into the dog.”

The veteran Tole is trained in narcotics, tracking, handler protection and article searches. Cash, who is still in training, will follow the same path but is only certified in obedience and tracking so far. Once fully certified, Roman said Tole’s duties will likely be focused on narcotic searches as he gets older.

“Tole hasn’t had any major health issues,” Roman said. “But running him hard for so long they’re going to wear down pretty quickly.”

Despite Cash’s limited training, the young K-9 already has successfully tracked one suspect, and Roman believes he is going to be a valuable asset to the force.

“So far in training, that dog is going to be a little rock star,” he said. “It’ll be a lot of fun running him.”

Roman is not the only one having a lot of fun with Cash and Tole. Department administrative assistant Michell Outlaw said she spoils the four-legged officers with treats and love as much as possible, sometimes to the dismay of Roman.

“They still want cuddles, and they want their ears scratched,” she said. “You can definitely tell the difference between Tole and Cash. Tole is more laid back, while Cash is all puppy energy.”

Roman said the dogs also are well-behaved when not on the job.

“Both of these dogs and probably the majority of K-9 dogs working in the United States are safe to have around family and kids,” he said. “I’ve got a 1-year-old family member, and if he could ride Tole and Cash, he would.”

But when it is time to work, these dogs know what to do.

“I don’t know if they actually see it like being on-duty or off-duty like a human does,” Roman said. “But they know when the game is being played and when it’s not being played.”