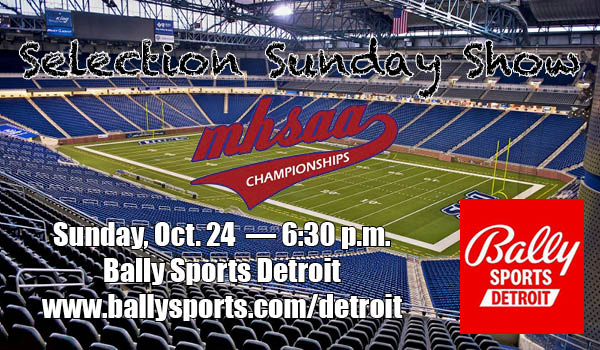 Brackets and matchups in all eight divisions for 256 11-player teams and 32 qualifiers across two divisions for 8-player football will be presented during the “Selection Sunday Show,” with all brackets to be posted to the MHSAA Website after the completion of the show at 6:30 p.m. Dates and times for first-round games will be added Monday.

Viewers also may watch on the Bally Sports Detroit website and app. The MHSAA Playoffs in both divisions are set to begin during the weekend of Oct. 29-30. The 8-Player Playoffs will conclude with both Finals on Nov. 20 at Northern Michigan University’s Superior Dome in Marquette. The 11-Player Finals will be played Nov. 26-27 at Ford Field in Detroit.

Lower peninsula boys soccer district tournaments continue this week with more than 50 games broadcast on MHSAA.tv and the NFHS Network. Two weeks remain in the volleyball regular season, with a number of key matchups of schools large and small filling a broadcast schedule offering more than 300 matches total this week.

Viewers also will be able to watch more than 175 regular-season football finales on MHSAA.tv this weekend, plus the last of regular-season live broadcasts by Bally Sports Detroit and State Champs! Sports Network. BSD will broadcast live on its primary channel Friday’s Southfield Arts and Technology at River Rouge matchup, with kickoff at 7 p.m. State Champs! Sports Network will broadcast Jackson Lumen Christi at Dearborn Divine Child on Friday, with kickoff also at 7 p.m.