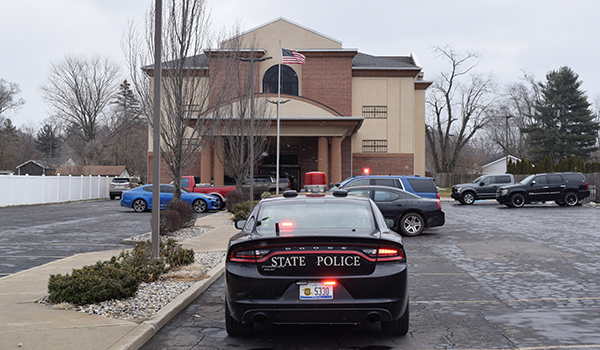 A male and a female are reportedly being treated for gun shot wounds sustained at the Quality Inn at 1265 S. 11th St. in Niles. Lt. Michael Stanton, of the Niles Police Department, said a call came into the station at 10:20 a.m. reporting shots fired. (Leader photo/CHRISTINA CLARK)

NILES — The teen involved in a shooting at the Quality Inn in Niles on March 1 was sentenced to a special probation that could keep the charge off her record if successful.

The 17-year-old girl pleaded guilty to careless use of a firearm resulting in injury or death and was placed on two years’ probation under the Holmes Youthful Training Act. She has credit for one day served, must spend at least 60 days on tether and must pay $508 in fines and costs. The weapon involved was forfeited.

Because the defendant is a minor and eligible for HYTA, Leader Publications is not releasing her name.

The incident occurred March 1 at the Quality Inn on S. 11th Street in Niles. Police were called to the hotel on reports of a shooting and arrived to find two people injured.

Defense attorney Carri Briseno said the defendant is currently in high school and expects to graduate in January. She is also employed part-time at a local restaurant.

“I have had a few discussions with her about the seriousness of this matter,” Briseno said. “It could have been much, much worse. This was a serious accident that resulted in injuries to two young people.”

Briseno noted that the HYTA probation will help her client focus on her future.

“Being on probation is a big opportunity to bridge this time when she’s making poor decisions,” she said. “She’s seeing a much bigger penalty than others her age. If other youth are out past curfew, they’re grounded but if she violates her probation, her conviction will be entered.”

the defendant said she made a bad decision and regrets her actions every day.

“When you were in this argument with your ex-boyfriend, did you at any point in time consider calling the police?” Berrien County Trial Judge Sterling Schrock asked. “Could you not have left the hotel room and called the police? What’s worse, being shot or killed or being called a snitch?”

Judge Schrock said he would not impose additional jail but said he would be monitoring her probation closely to see if she violates and needs a “wake up call.”

He noted that the defendant was both drinking alcohol and using marijuana while underage.

“I can preach at you until I’m blue in the face. I have plenty to say to young people,” the judge added. “This is all about your rethinking of your circumstances.”