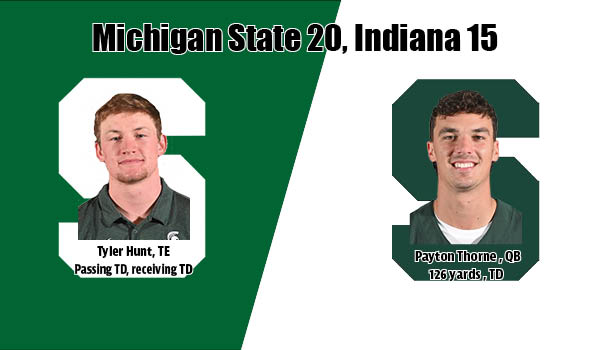 BLOOMINGTON, Ind. — The Michigan State football team improved to 7-0 on the season after defeating Indiana, 20-15, Saturday afternoon at Memorial Stadium to reclaim the Old Brass Spittoon.

Although the No. 10/9-ranked Spartans (7-0, 4-0 Big Ten) were limited to 241 yards of total offense, MSU forced three turnovers in the game, including Cal Haladay’s 30-yard interception return for a touchdown in the first quarter.

Kenneth Walker III, the leading rusher in the nation, had 23 carries for 84 yards for the Spartans. Payton Thorne was 14-of-26 passing for 126 yards and one touchdown, while Jayden Reed had four catches for 70 yards.

Linebacker Quavaris Crouch led the Spartans with 13 tackles, while safety Xavier Henderson had eight tackles, including one for loss. MSU had three sacks and five tackles for loss in the game.

Indiana opened the game’s scoring with a 24-yard field goal by Charles Campbell on its first possession to take an early 3-0 advantage, but the lead was short-lived, as Haladay returned an interception 30 yards for a touchdown to put MSU on top, 7-3, at the 4:33 mark of the first quarter. It marked MSU’s first interception return for a touchdown since Mike Panasiuk had a pick-six in the 2019 Pinstripe Bowl.

Campbell drilled his second field goal, this time from 44 yards out, early in the second quarter (14:21) to trim MSU’s lead to 7-6. Midway through the second, Indiana drove to MSU’s 13-yard line, but the Spartans held the Hoosiers out of the end zone again and Indiana had to settle for its third field goal of the half from 25 yards away to take a 9-7 lead.

The Spartans went back ahead, 10-9, midway through the third quarter as Coghlin tied his career-long with a 51-yard field goal.

Michigan State took advantage of Darius Snow’s first career interception on the ensuing Indiana possession, as the Spartans scored their first offensive touchdown of the day on a five-play, 39-yard drive. Tyler Hunt not only threw a 15-yard pass to Thorne on the second play of the drive, but he also caught a 12-yard TD pass from Thorne for his first career touchdown reception to make it 17-9 with 1:49 remaining in the third.

Indiana (2-4, 0-3 Big Ten) scored its first touchdown of the game early in the fourth quarter on Stephen Carr’s 1-yard run, but Henderson made a huge tackle on Peyton Hendershot to stop the 2-point conversion short of the goal line, keeping Michigan State in front, 17-15, with 12:56 in the game.

The Spartans responded on their next drive, going 60 yards on 13 plays, capped by Coghlin’s 49-yard field goal, to increase their lead, 20-15.

Michigan State has a bye this weekend before returning to action Saturday, Oct. 30 against Michigan in Spartan Stadium.