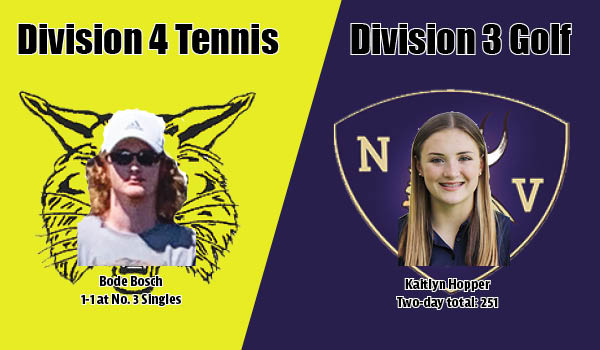 ANN ARBOR — The Brandywine tennis team scored a point at the Division 4 State Tennis Finals at the University of Michigan and Ann Arbor Pioneer this past weekend.

All four divisions of the tennis finals were hampered by weather. Many of the opening day matches on Friday had to be completed Saturday before the rest of the tournament could be completed.

Traverse City St. Francis captured the Division 4 state championship with 34 points, while Grosse Pointe Wood University of Liggett was the runner-up with 27 points.

The Bobcats’ earned their lone point at No. 3 singles when Bode Bosch defeated West Bloomfield Frankel Jewish Academy’s Aiden Charlip 6-2 and 6-1. Bosch was eliminated in the second round by St. Francis’ Owen Jackson 6-0 and 6-1.

The Edwardsburg golf team finished 18th at the Division 3 Golf State Finals at Forest Akers East on the campus of Michigan State University this past weekend.

Bloomfield Hills Cranbrook Kingswood was the team champion with a two-day total of 694. The Eddies shot 884 in their first-ever trip to the state finals.

Lauren Timpf, of Macomb Lutheran North, was the medalist as she finished with a 139, which included an open-day 66.

Edwardsburg was led by Chloe Baker’s 197.

Niles’ Kaitlyn Hopper, who qualified as an individual, shot a two-day total of 251.